♫Ooooooooh, every party has a pooper, that’s why we invited Gung-Ho!♫…..Sorry, does that seem harsh?  ‘Cause, I’m about to be real with y’all, I…uh…I don’t really care for Gung-Ho.  I get that he’s one of the core characters to a lot of people, I do, really, but I’ve just really never liked him.  I began my dislike of him in 2002, when I was first discovering 3 3/4 inch Joes, and I was forced to buy a Gung-Ho to get the Destro figure that I actually wanted…and then it pretty much stopped there, because I didn’t really like Gung-Ho, so I just never bought one again.  Well, until now, that is.  Look, I want to support this new G.I. Joe line, and I suppose I don’t have the seething hatred of the guy that my 10-year-old self did. 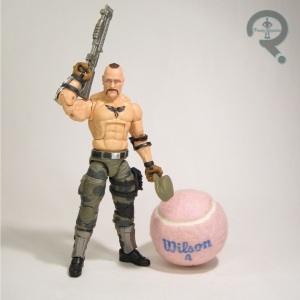 Gung-Ho is figure 07 in Hasbro’s G.I. Joe Classified Series, the second figure numerically in the second main release assortment of the line.  The figure stands 6 1/2 inches tall and he has 36 points of articulation.  Design-wise, Gung-Ho’s not a terribly radical departure from his original v1 design…at least as a whole.  He’s got the same basic look to him, but some of the more real-world military elements are a bit different this time.  Notably, his hat isn’t quite shaped the same way as a proper Marine cap would be, which has some caused a bit of a stir amongst the purists in the audience.  As someone who’s first introduction to the character was the 2002 version, who also had a more generic hat, I didn’t realize it was that big an issue.  Ultimately, the rest of his get-up’s never been much for regulation anyway, but different strokes and all that.  The other notable adjustment is giving his vest a more sci-fi make-over, which matches with the adjustments made to other characters.  In terms of construction, Gung-Ho marks another bit of parts re-use for the line.  In a similar fashion to Beach Head making use of some of Duke’s parts, Gung-Ho is built on the same core body as Roadblock.  He gets a new head, of course, as well as a new left knee (sans knee pad), and new add-ons for his hat, vest, wrist and shoulder guards, and a thigh piece.  The wrist and thigh add-ons previously were seen on the Cobra Island 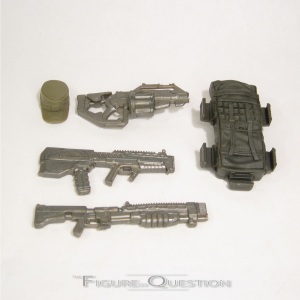 Roadblock variant, though they were designed for this guy.  The head and hat pieces are definitely the best work on the figure.  Gung-Ho’s got a pretty distinctive look, and it’s well translated to this figure.  The hat sits tight on the head, and you could be forgiven for not realizing it’s actually a separate piece.  Removing it reveals an adorable little patch of hair at the very top of Gung-Ho’s head, which is actually a really fun little touch.  Gung-Ho’s paint work is pretty decent.  It’s fairly subdued, in keeping a bit more with the more recent renditions of his design.  It’s certainly not the turquoise of his original figure.  Another notable change-up to his design occurs under this section; Gung-Ho’s tattoo has classically been a slight take off of the Marine insignia (although not an exact match, since that’s trademarked), but for this release, it goes a bit further away from that source, presumably to further avoid any trademark issues.  Gung-Ho continues the line’s trend towards impressive accessory selections, with a backpack and three different guns: a shotgun, an assault rifle, and a grenade launcher looking thing.  The back pack can carry two of the guns at a time, which is pretty fun, though they do have a tendency to pop out of place somewhat easily.

As I noted in my intro, I’m not much of a Gung-Ho fan.  In fact, I dislike him so much that when I drew up a series of G.I. Joe parody strips while I was in middle school, I ever so eloquently named his parody match “Dung-Ho”.  I know, I’m very clever.  All of this is to say that I wasn’t super thrilled by the prospect of this guy in the new line, but once I saw the prototype, I was actually somewhat intrigued.  He changes up some design elements, much like many of the figures in this line, but I think it works for the overall figure, and he’s got a lot of cool stuff going on.