One of the primary appeals of ToyFare‘s exclusive mail away offers, for the 5-inch Marvel stuff, at least, was the ability to fill in some teams and line-ups that were just missing one stray character here or there, or at least give them at least a touch more depth to their numbers.  There were a lot of short-lived lines from Toy Biz in the ’90s, so they had plenty of loose ends to worry about.  Case in point: Generation X.  The X-spin-off team had their own line, which ran two series, and left the central team without a number of its core members.  While it was still rather lacking at the end of the day, they did get at least one extra core member via the mail-away set-up, and gave current main X-Men team member Everett Thomas, aka Synch, his very first (and to date, only) figure in the process.

Synch was offered up in ToyFare Magazine #9, first becoming available for order in May of 1998, and shipping out later that year.  After nine Marvel exclusives, they had a Witchblade figure for issue #8, and then came back to Marvel with this guy.  He was then the last Marvel exclusive for six months, when Havok picked up the baton.  The figure stands about 5 inches tall and he has 7 points of articulation.  The Generation X figures were at a weird spot for Toy Biz, articulation wise, as they decided to eliminate the elbow and knee joints on all of the figures for some reason.  Synch did at least get extra shoulder movement, by virtue of making use of Banshee’s body from the main line.  Toy Biz apparently felt Banshee always needed the extra movement, and Synch got that on a technicality.  Or, perhaps he just copied it from Banshee using his powers.  That’s a pretty solid explanation, right?  In addition to using all of Banshee’s parts below the neck, Synch also got the head from the Space Riders version of Professor X.  It’s not quite the face I envision Synch having, but it was a bald head that actually had ears, which made it a better fit than the Silver Surfer head, I suppose.  It’s honestly not the worst choice.  The rest of the work is handled with the paint.  It does an okay job for the most part, but for some reason the belt buckle is way larger than the actual sculpted piece, which makes it look really strange.  That said, they did actually try on this one, and he even got some extra accenting on the yellow parts of his costume.  It’s a bit heavy handed in some spots, but the effort’s at least nice.

I actually kinda liked Generation X back in the day, and I really liked my figures of Jubilee, Chamber, and Skin from the toyline.  I didn’t have a Synch growing up, though, mostly because he just wasn’t a figure I ever saw turn up anywhere.  I know he’s not generally regarded as being a very good one, but I’ve never much looked into that.  Whatever the case, my first real chance to get one came quite recently, when he got traded into All Time, which made him an easy pick-up for me.  He’s not a bad figure.  Maybe not great, but he gets the job done.  It’s a shame that they didn’t ever get M or Husk out, leaving the team incomplete, even with this guy included.  Of course, with him just being added to the main X-team, maybe this won’t be the only Synch figure for too much longer.  Fingers crossed. 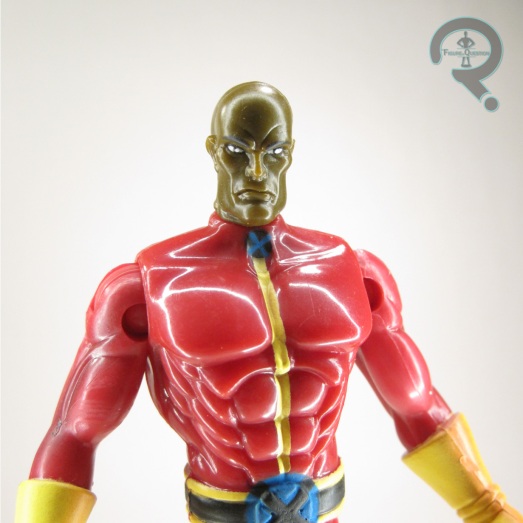