Despite a prominent spot in 2001’s Robots in Disguise, Ultra Magnus was effectively absent from the Unicron Trilogy, at least as far as direct presence was concerned.  The name was used again for Energon, on a rather rare redeco of Armada Overload.  As far as any actual Armada coverage, the closest he would get would come two years after the Armada line, as part of the more all encompassing Universe line.  Since I’m in an Armada sort of mood, but I also gotta have some Magnus love, let’s take a look at that figure!

Ultra Magnus was released in the Transformers: Universe line, as half of one of Hasbro’s “Battle in a Box” sets, an run of market six (close out and department stores like Kohl’s) exclusive sets they tried with their in-house brands in ‘04.  His pack-mate was Treadshot, who isn’t an Ultra Magnus, so he’s not getting a review here.  In his robot mode, Magnus stands about 5 1/2 inches tall and he has 15 workable points of articulation.  Structurally, this Magnus goes back to the tried and true method of making a Magnus by taking an Optimus and painting him white.  This one specifically is based on the Armada Prime mold.  It’s not a bad mold, apart from the forearm assembly being backwards, and has a decent update on the classic Optimus aesthetic.  The new color scheme works really well with it, and actually does look pretty suitably like a new character.  He’s got a set of forearm-mounted guns, which serve as his smokestacks in his alt-mode.  They were removable here for…reasons?  I don’t really know why.  Magnus is also packed with his own Mini-Con companion, Overrun, who was shared with the previous Optimus release.  He’s slightly redecoed here.  He’s got a kind of goofy robot mode, but he can also serve as a gun for Magnus. 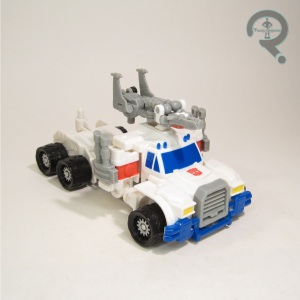 Magnus’s alt-mode is a truck.  That’s it.  Okay, I mean, it’s like a sci-fi truck, I guess.  It’s not a bad alt-mode, especially for a Magnus, and the transformation sequence isn’t too complex or anything.  Those smokestacks fall off a lot, but it’s otherwise alright.  Overrun gets his own alt-mode, in addition to the gun mode, where he turns into a jet.  Right out of the box, his wings are reversed, but this can be easily corrected by popping them out and then back into the right spots.

I didn’t know of this set’s existence as a kid, or even until later into my adulthood, so I never did get around to looking for it.  Instead it rather came to me, as it was traded into All Time last summer.  I just wanted the Magnus, so Max wound up taking the Treadshot I didn’t want, and I had a sweet new Magnus.  He’s nothing phenomenal or anything, but he’s a Magnus that fits with my Armada collection, and that works for me. 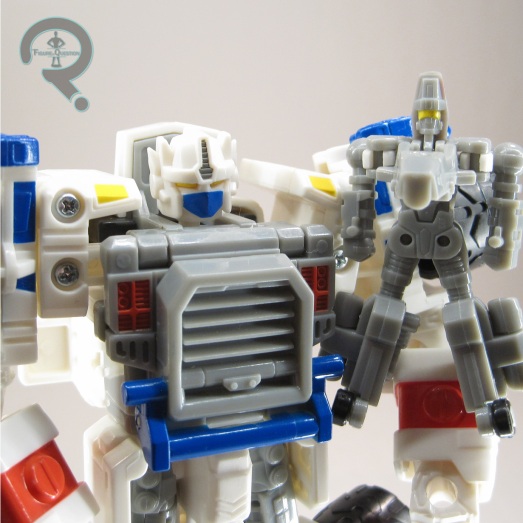