“Tony Stark takes on the world’s worst villains in the Mark 3 suit: a technological wonder equipped with a variety of stunning enhancements and upgrades.”

Back in the early days of this great Legends review journey, when I still was young and hopeful about Marvel Legends, I discussed the earliest days of the MCU, back when it was just Iron Man.  Hasbro didn’t quite have their game down at that point, and while the tie-in figures for Iron Man weren’t bad, there’s certainly some room for updating at this point.  I already looked at Iron Monger, but I’m finally circling back around with a look at the title character, sporting his fancy (at the time, anyway) Mark III armor.  Let’s have a look at that one!

Iron Man Mark III is the second-to-last of the five single-packed standard release figures in the Infinity Saga sub-line of Marvel Legends.  He’s the second of the two Iron Man offerings as well, and only the third officially Iron Man-branded offering under the Legends banner.  He’s based on his appearance in the final third or so of the first film, when Tony’s gotten the armor up and running, but it hasn’t yet taken the beating it would during the battle with Iron Monger.  The figure stands 6 1/2 inches tall and he has 33 points of articulation.  The articulation scheme marks the really big improvement here.  He takes a few pages out of the Mark VII’s book in terms of layout and structure, but also adds in drop hips, a shoulder armor structure similar to the way the Classified Series has been handling them, and just generally a greater range of motion on all of the joints.  The Mark VII was pretty great, and this one just does a little bit better than that.  His all-new sculpt does quite a nice job of capturing the suit’s design from the movie, properly machined and 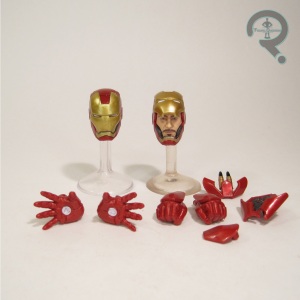 geometric.  As with the VII, the III benefits from a much better scaling to the rest of the Legends line than other MCU Iron Men, which is certainly a plus.  Not quite so much a plus on my figure (and hopefully only on my figure) was the big glob of glue on the front of his full helmeted head.  I was able to remove it most of the way using a knife, but it was certainly no fun, and it results in my figure looking just a touch rougher than I’d like it to.  Beyond that, the QC does seem okay on the figure.  His color work is generally pretty decent.  I quite like the metallic red plastic, and the application on the gold paint is overall pretty cleanly handled.  I also like how they’ve used the printing to do the arc reactor, giving it more of an actual illuminated effect.  The Mark III is packed with an alternate head with the mask flipped up, two sets of hands (fists and open for blast), and three swappable plates for the right forearm, allowing for collapsed, rocket launching, and shield.  I was genuinely surprised by the lack of any repulser effects, but I’m not unhappy with the selection we got.

I fondly remember my Prototype Iron Man from the ’08 line, but, much like Monger, I knew there was definite room for an upgrade.  With all the fancy suits that have followed, it can be easy to overlook the Mark III and its importance in the grand scheme of things, but I’m certainly glad Hasbro didn’t, and finally gave us a really good version of the armor.