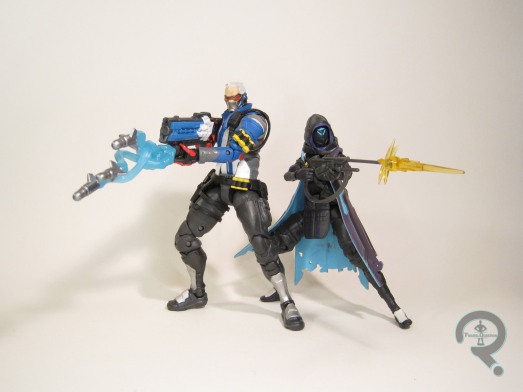 “Years after the collapse of Overwatch, Soldier 76 recruits Ana Amari to rejoin the fight.”

You guys remember when I was reviewing Fortnite figures despite knowing absolutely nothing about Fortnite?  Are you ready to go down that road again, but slightly different?  Before Fortnite, the gaming sensation that had everybody all a titter was Overwatch.  Apart from a line of Pop!s from Funko, there was really not much merch when the game was really big, but now that things have died down, there’s been a push to merchandise it some more.  After missing out on the main Fortnite figure license, Hasbro decided to jump on the Overwatch bandwagon.  And, where Hasbro goes, it appears I follow, so let’s just look at the figures, shall we?

Ana and Soldier: 76 are one of the pair of two-packs (the other being Mercy and Pharah) accompanying the first series of Hasbro’s Overwatch Ultimates line.  They started hitting shelves around the beginning of the summer.

So, Ana.  She’s…a member of Overwatch?  And a sniper, I guess?  Apparently she’s one of the older members of the team, and linked pretty closely with Soldier: 76 and Reaper.  This figure is based not on her standard appearance, but rather on her time as the vigilante Shrike, sometime in the game’s past.  I think.  I’m not sure, because, you know, not really familiar with the source material.  The main difference with this particular design is that she’s got a full faceplate thing, which is actually a pretty solid design element, which I can certainly get behind.  The figure stands a little under 6 inches tall and she has 27 points of articulation.  Ana’s an all-new sculpt, and she goes for the base figure with a bunch of overlays set-up.  The hood and jacket in particular are separate pieces, and are free-floating.  For the hood, it’s not a big deal, but for the jacket, it means it pops up and down a lot and just generally looks a little goofy.  It contributes to the overall rather flimsy feel to this figure.  There are also a few issues with how the articulation is worked into the sculpt.  The legs are generally pretty well-handled, but the arms really seem to suffer from some design choices.  The elbows don’t have a ton of range, and don’t even quite make a 90 degree bend, which definitely limits the posing options on the figure.  On the plus side, Ana’s paintwork isn’t bad.  It’s mostly pretty basic stuff, but the application is clean, and the colors are nice and contrasting.  Ana is packed with two sets of hands (relaxed and gripping), a rifle, a pistol, and an blast effect piece.

Soldier: 76!  He’s a patriotic super-soldier from the past.  Now there’s a concept I can grasp!  Unlike Ana, Soldier: 76 is based on his main game appearance.  As the most played character in the game (according to the wiki, anyway), I guess it makes sense to go with the basic look?  It helps that it’s honestly his best look, I suppose.  The figure stands 6 1/4 inches tall and he has 32 points of articulation.  Solder: 76’s sculpt is a much better balance of the various elements than Ana’s.  His articulation is far better worked into the sculpt, and far less restricted.  It’s implemented in a very similar fashion to the Lightning Collection figures, which I certainly don’t have a problem with.  Also, most of the costume is sculpted right on the core figure, with the add-ons only being for his shoulder straps and belt.  In Ana’s defense, Soldier: 76 does get something of a leg up here, with his design just generally being far more fit for translation to a figure.  Whatever the case, the sculpt is a faithful recreation of his in-game model; so faithful, in fact, that it leads to my only real complaint about the sculpt.  Soldier: 76’s game model has a holstered sidearm, which is never taken out.  This figure has that same element, and it’s ever so slightly frustrating that it’s not actually a proper gun.  Soldier: 76’s paint work is generally pretty decent, but I did notice a fair bit more slop on this guy than I’ve seen on most Hasbro figures as of late.  There’s also some noticeable spots on the “76” on the back of his jacket.  It’s nothing figure-breaking, but Hasbro has certainly done better.  76 is packed with two sets of hands (gripping and fists), his rifle, and a missile effect piece.

I know nothing about the game, so when these figures were first shown off, I wasn’t in on them.  When they started showing up in-person, I spotted this set at a Walmart, and as cool as it looked, I still opted to pass on in, because, as I noted, I know nothing about the game, and the figures are a little bit on the expensive side for that sort of thing.  While on vacation, my Xbox controller died, so we took a trip to the local Gamestop to trade it in for a new one.  While there, I again spotted this set, but now with a pretty decent sale attached to it, meaning that I effectively paid the price of one figure for the pair.  I was mostly buying it for Soldier: 76, and he’s honestly a really fun figure, definitely worth what I put into the set.  That’s a good thing, because Ana’s really not all that impressive.  There are some cool ideas there, but she just ends up “meh.”  It’s a good thing she’s got 76 to carry her.