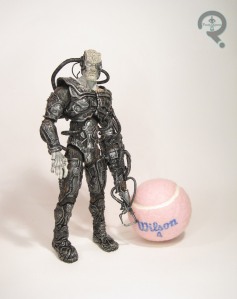 The Cardassian Borg, designated 3 of 3, is the final figure in the Borg: Assimilation line from Art Asylum*.  The Cardassian is the shortest of the three Borg figures, at a little under 8 inches tall.  He’s got 17 points of articulation, which includes moving arms on his left arm attachment, which is pretty cool, actually.  That’s probably the last time I’m using “pretty cool” in this here review.  Because this is a Cardassian, perhaps one of the most boring races in all of Star Trek.  This figure has an all-new sculpt, which is, from a technical standpoint, pretty solid.  The Cardassian Borg is probably the least borg-ified of the bunch, lacking the shoulder pads and more obvious technical implants, and also having his neck and one of his hands exposed, which keeps him looking more like a standard Cardassian.  Even the armor’s detailing follows the usual Cardassians design more closely than the others in this assortment.  Even the facial expression lacks that dead-ness that the other two figures have.  He’s got the same sort of a sneering expression that seemed to be a genetic trait of those wacky Cardassians.  The paint on this guy is pretty much on par with the other two, which is to say it’s honestly pretty good.  Hey, look at that.  I almost said “pretty cool” again.  Well, what do you know.  Like the other two figures in this assortment, the Cardassian Borg’s only accessory is that weird coin thing.

I really only got this guy to complete the set.  I’m guessing you probably could have gathered that from the review.  Honestly, just as a figure, this one’s the weakest of the three, but he’s not atrocious. It’s more that I just don’t really like Deep Space 9, and I sort of associate the Cardassians entirely with that show.  He could be worse, I suppose.

*There were actually four Borg figures originally designed for this assortment.  The fourth would have been a Ferengi, but for a number of reasons, the assortment was cut back to three figures.  The Ferengi would have likely been in a second series, had there been one.