“Eugene Patilio suits up as Frog-Man in a misguided attempt to restore his family’s good name.”

FROG-MAN!?! They made a Frog-Man!?!  …Okay, can I really be that surprised at this point?  Probably not.  I don’t know.  Everything is skewed these days, and the current state of Legends is such that making previously unthought of characters no longer seems so unthought of.  Where was I?  Frog-Man.  Right. So, for those of you who aren’t so familiar with Frog-Man (which I’m going to assume is most people, because he’s Frog-Man), he’s actually a little bit of a legacy character.  His father, Vincent, was the Daredevil villain Leap-Frog, and after he gave up on the whole super villain thing, Eugene took over his gear, and took up as a would-be hero, now using Frog-Man, after Leap-Frog was deemed too goofy.  Eugene has mostly stuck to the background of the Marvel universe, but turns up every now and then, including most recently as one of Tony Stark’s allies in the newest Iron Man series.  And hey, now he’s got a toy! 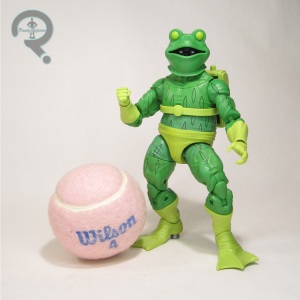 Frog-Man is figure 6 in the Stilt-Man Series of Marvel Legends, and he’s the second of the comics-based figures in the set.  He’s this assortment’s resident odd-ball figure, picking up from last year’s inclusion of White Rabbit (a character Frog-Man’s got a little bit of history with, so there’s that).  The figure is 6 1/2 inches tall and he has 31 points of articulation.  Frog-Man’s construction is largely made-up of re-use, specifically of the Doc Ock body from 2018.  It’s a good body, and one that so far hadn’t seen any sort of re-use, so it’s still rather unique.  It also matches up quite well with Frog-Man’s design in the comics, which makes it quite a sensible choice for re-use.  The only slight downside is that it means he’s still got visible pins on his elbows and knees, but they’re at least comparatively smaller than some of the others.  In order to switch him from Ock to Frog-Man, this guy gets a new head, feet, and an add-on piece for the back pack.  The head’s definitely the most distinctive part, and it’s pretty nicely implemented, with clear differentiating for the mask and what we can see of the underlying head.  The head under the mask is perhaps a touch intense, I think, 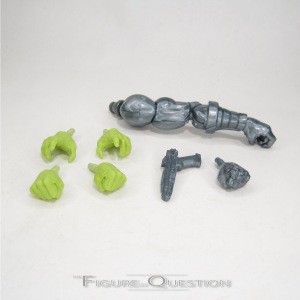 for Frog-Man, but it’s a minor thing, and I really like how the mask looks.  The feet give him not only his flippers, but also the springs on the heels that give the suit its jumping abilities.  He’s quite stable on these feet, which makes him quite easy to pose.  The back pack is useful in covering up the one character-specific remnant of the Ock sculpt, the ports for his arms on his back.  It plugs into the top ports to keep it secure, and otherwise works out pretty well for the look.  Frog-Man’s paint work is largely pretty basic.  Most of the colors are molded plastic, but what paint is there is pretty cleanly applied.  I do like the pattern on the darker sections; it helps sell the goofy comics design even further.  Frog-Man doesn’t seem like a character who lends himself to accessories, but he does still get two sets of hands, in both fists and open gesture poses, so that’s pretty cool.  He also gets the left arm, extra hand, and gun for the Stilt-Man Build-A-Figure.

Frog-Man’s one of those characters so minor that I know him more from his reputation of being minor than from actually reading his comics appearances.  I’ve definitely read a few of his appearances, and I have this sort of soft spot for the guy, even without that really direct connection. I was not expecting him at all before he was officially shown off, and I didn’t pay him too much attention in light of the rest of the set.  After getting them in hand, though, he really works for me, just because I didn’t expect him, so I just got to enjoy him for being the cool, goofy toy that he is.  And boy is he cool and goofy.  And boy do I love him. 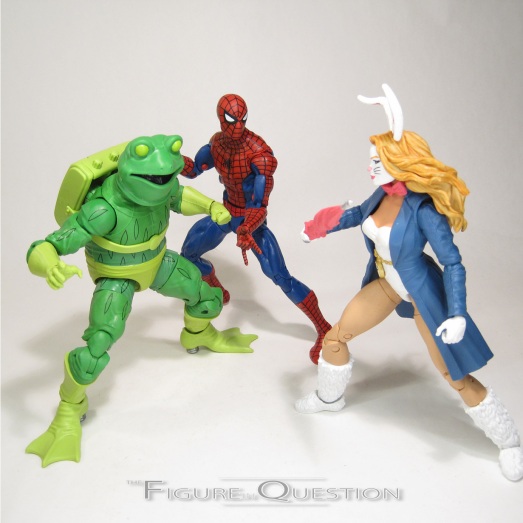