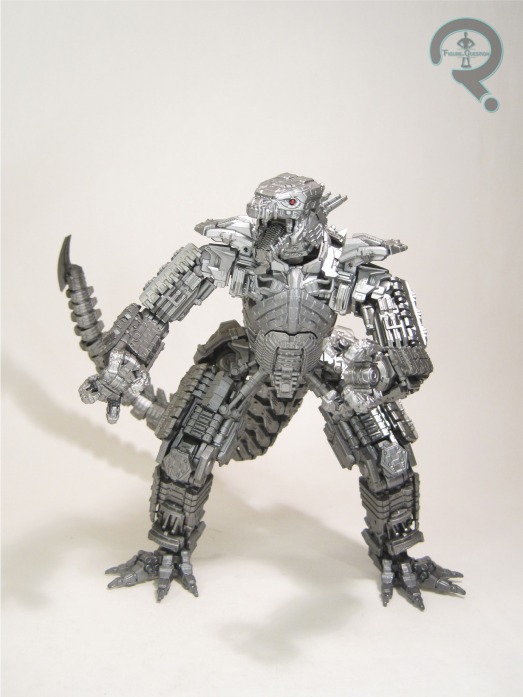 Just over a year ago, Godzilla Vs Kong premiered on HBO Max for streaming…and was also in theatres, I guess, but I was still avoiding them, so, you know, I wasn’t tracking such things.  I really enjoyed the movie, though, since it delivered on pretty much everything I had hoped for in a movie called “Godzilla Vs Kong.”  It had Godzilla, it had Kong, they were versus-ing, and, more importantly, it also had Mechagodzilla, Godzilla’s robot doppelganger, and my second favorite thing about the Godzilla franchise.  I picked up Playmates’ movie-inspired version of the character last year, and was pretty happy with that one, but you can always use just a little bit more Mechagodzilla, right? 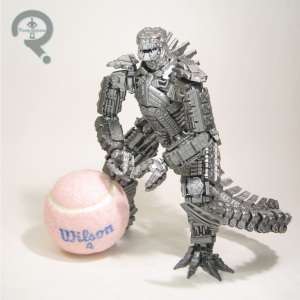 Mechagodzilla was released as part of Bandai’s S.H. Monsterarts line, hitting retail domestically at the end of February of this year.  He’s the third figure in the Godzilla Vs Kong subset, joining the Kong and Godzilla figures released last year to more closely tie-in with the movie.  The figure stands about 7 1/4 inches tall and he has, like, so much articulation.  Just many articulations, you guys.  The tail is almost entirely segmented into individual joints, and the pistons on the hips are designed to work.  He’s got an articulated jaw, he’s got butterfly shoulders.  About the only things missing are finger and toe movement, but at this size, that’s far from an issue.  They’d probably be at risk of breakage anyway.  As it stands, the current articulation scheme gives this guy a pretty solid range of motion.  The elbows are notably a little restricted, but beyond that, it’s impressive, especially that tail.  Mechagodzilla sports an all-new sculpt, based on his appearance in the movie.  Obviously, at this price-point, the sculpt is a lot more involved than the Playmates equivalent.  Everything is much sharper, and I do mean that literally; you gotta be careful with that tail.  Everything is very crisp, and convincingly mechanical, and there’s a ton of really great detail work on the inner mechanics of everything.  He’s also got a little bit of diecast metal worked into the legs and feet, which not only gives him a little extra heft, but also makes him very stable on his feet.  Mechagodzilla’s paint work isn’t too terribly involved, at least in terms of coloring, but it’s at least consistent.  The silver is all painted, which looks quite nice, and the handful of red accents do a good job of breaking things up just a little bit.  Mechagodzilla is light on the extras, but not completely without.  He gets two different sets of hands, one set open, the other closed, in order to add some extra variety to his posing.  It might have been nice to get a blast effect for his atomic breath, or possibly even some damaged parts, but ultimately, it’s nice that we got anything at all.

I like Mechagodzilla a fair bit, but the nature of his release meant that I wasn’t expecting to have an easy time getting ahold of this one through my usual means.  I was also pretty content with the Playmates figure, which is surprisingly good for its price-point.  That said, when one of these rolled through All Time, and I was able to snag him for a pretty solid deal.  Coupled with a general slow down in what I’ve been picking up, he just felt like the right thing at the right time.  This figure’s really solid, but in like a subtle way.  There’s a lot going on with him, but he’s not overly showy.  He’s just a really cool figure, and I’m glad I picked him up.

“A robotic apex predator with unstoppable powers of laser destruction, Mechagodzilla was created in secret to destroy Godzilla and end the reign of monsters.”

On March 31st, we finally got the conclusion to what Legendary’s Monsterverse has been building up to for a few years, Godzilla vs Kong, which was a movie that was, unsurprisingly, about Godzilla and Kong having a little bit of a spat.  It’s a big, fun action movie, which very much delivers on the promise of the title, and I really quite enjoyed it.  After being rather on the quiet side in terms of merchandising, this movie was a Monsterverse film that actually got a pretty well-formed tie-in line of toys, giving us a couple of variants of the two title characters, as well as some of the more antagonistic threats that they face within the movie.  The film’s biggest antagonist is definitely Godzilla’s robotic doppelgänger, Mechagodzilla!

Mechagodzilla is part of Playmates’ basic Godzilla vs Kong line, which is, as of right now, a Walmart-exclusive line of figures, which started hitting shelves a couple of weeks before the film’s release.  He was one of two items that leaked the character’s appearance prior to the film’s release, although we all had a sneaking suspicion even before that.  The figure stands about 6 inches tall and he has 14 points of articulation.  He’s actually one of the best articulated figures in the line, with most of the basics covered, as well as a few extra joints.  I was a little bummed by the lack of elbow joints, but otherwise he’s pretty posable, especially given the price point.  The figure’s sculpt is so far unique to him, although it’s possible it might be picked for a repaint later down the line, like the basic Godzilla and Kong sculpts got.  Whatever the case, it’s a pretty decent one.  It’s not quite to the level of Bandai Japan or NECA, with the general detailing being a little on the softer side than the more collector-oriented stuff, but there’s still a lot of detailing going on there.  Like the rest of the line, he boasts “Battle Damage Reveal!” which in his case means that the panel on the center of his torso comes off, revealing some more mechanical details beneath.  It doesn’t really track directly with anything from the film, but it’s still kind of a cool gimmick.  Additionally, while it doesn’t do much for the figure on his own, the interior of the mouth has a spot that’s compatible with the atomic breath effects piece designed for the standard Godzilla.  We still don’t have said piece in red, of course, but it’s still nice from a cross-compatibility stand-point.  Mechagodzilla is rather basic on the paint work stand point, mostly being molded in the proper colors.  There’s a few small spots of red, but that’s really it.  It’s not particularly involved, and does look somewhat devoid of detail in some spots, but, again, for the price point, it does make some sense.  While Mechagodzilla doesn’t include any sort of effects pieces of his own, he does include a miniature version of the HEAV, or Hollow Earth Anti-Gravity Vehicle. Mechagodzilla doesn’t actually ever directly interact with the HEAV, but it’s a nice way of at least getting the piece out there.  It’s also just a pretty nifty little piece all on its own.

While I’m hit and miss with Godzilla himself in regards to the toy world, I do like me some giant robots, and as such, Mechagodzilla is very definitely a thing that makes me go “wow, I want that.”  That’s ultimately what I said when, after Max picked up one of these for himself.  Thankfully, he was more than happy to keep an eye out for a second one for me, and boom, here we are.  Mechagodzilla is a really fun figure, and very hard to beat for the $10 asking price.  Playmates did a great job with this line, and I’m very seriously tempted to pick up a few of the others.