“A vapor farmer on Arvala-7, Kuiil came to seek peace in an out of the way world, which is now being trespassed upon by criminals and mercenaries.”

It feels like just yesterday I was talking about the amazing turnaround The Mandalorian had done for Ugnaughts with the character of Kuiil, but apparently it was a whole month ago.  Time is truly an enigma, isn’t it?  Well, after two years of no Kuiils, Hasbro is giving us a year of three Kuiils, with the previously reviewed Black Series figure, the upcoming Mission Fleet release, and today’s offering, a Kuiil in vintage stylings!

Kuiil is part of the seven-figure Mando-inspired first mass retail assortment of Hasbro’s Star Wars Retro Collection line.  The figure stands 2 1/2 inches tall and he has 5 points of articulation.  Kuiil’s another all-new sculpt.  He’s no doubt inspired by the vintage Ugnaught, them being of similar design struction and all, but there are no directly shared parts between them.  The sculpt is a good middle-ground between screen accuracy and that true Kenner feel.  He’s not technically accurate, of course, with the face being a little more alien, and the details of the costume are shifted around and adjusted a bit.  It’s a bit like an early animated equivalent to the live-action look.  The broad strokes are certainly, making him easily identifiable, but he at the same time feels very authentic to the older aliens.  He’s even got that mix of one gripping hand and one different pose, which also feels very true to the cantina aliens.  Kuiil’s paint work continues the Kenner style of slight inaccuracy.  The colors are certainly drawn from a similar palette as the proper ones, and at first glance they honestly don’t seem that far off, but as you double check them, you realize just how far off they become.  But again, this is the correct course for that truly authentic feel.  And, it’s honestly a pretty good look regardless of accuracy.  Kuiil is packed with his small blaster rifle, which he can hold in his right hand quite well.

As I mentioned in the Black Series review, I’ve been waiting for Kuiil toys since episode 1 of the show.  When it came to the retro figures, he certainly felt like a natural fit, and, after IG-11, he was probably the one I wanted the most.  In hand, he’s really great, and is, up to this point, the figure in the set that best captures the feel that Hasbro’s going for with these figures.  He truly feels like a proper ’80s release, and is just a lot of fun.  Certainly a nice surprise of a figure.  Both this and the Black Series figure were nice surprises, both for entirely different reasons, and I really dig them both for those differing reasons. 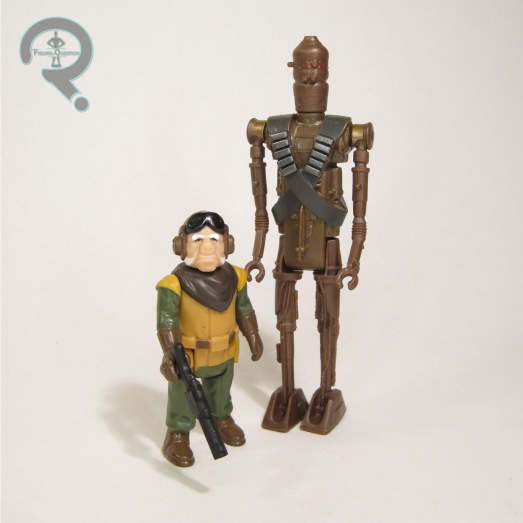 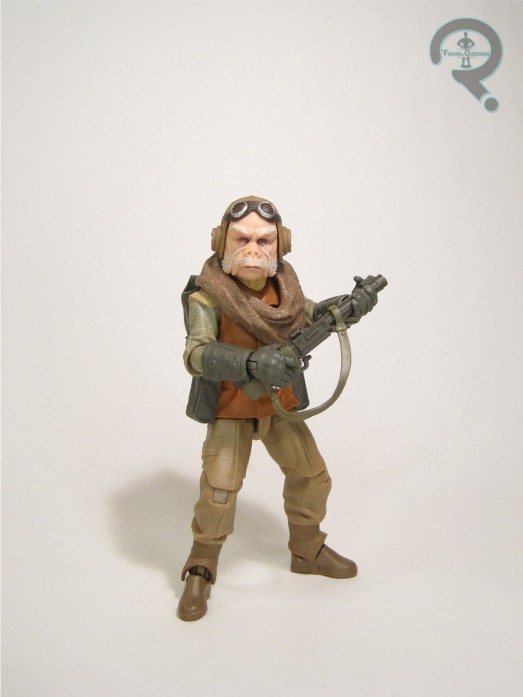 “Kuiil came to seek peace in an out-of-the way world. He has worked a lifetime to be free of servitude and offers valuable skills for those willing to meet his price.”

One of the things The Mandalorian has excelled at is taking pieces of Star Wars left kind of unexplored (in mainstream media, anyway) and actually putting a decent amount of time and energy into making audiences care about those things.  Take, for instance, the Ugnaughts, the race of small, pig-faced, troll-men, who served as background filler for the Bespin scenes in Empire.  Did anyone really care about them?  Really?  Then The Mandalorian comes along and gives us Kuiil, and all of the sudden we’re sad when an Ugnaugh dies.  Feelings about Ugnaughts?  That doesn’t seem right.  Damn you, Nick Nolte-naught and your lovable speech quirks!

Kuiil is a Phase IV Black Series release, as figure 07 in the Mandalorian sub-set of the line.  He’s part of the third assortment of this phase, alongside yesterday’s Greef Karga figure.  He too is based on his Season 1 appearance, because he kind of has to be, doesn’t he?  The figure stands about 4 1/2 inches tall and he has 27 points of articulation.  Despite his slightly smaller stature, Kuiil is still more or less on par with most Black Series releases in terms of posability.  About the only area I might say could use some improvement is the elbows, which are a little restricted, thanks to how the sculpt works out.  Thry aren’t terrible, just not quite up to the latest standards, especially given the recent trooper updates.  Kuiil’s sculpt is generally a rather impressive one, and certainly a benefit of him not getting a figure for over a year past his original debut.  By far the most impressive part of the sculpt is the head, which is just the spitting image of his in-show design, and also features a impressively designed and scaled aviator’s cap and goggles.  I honestly wasn’t expecting them to be removable at first glance, but I was very pleasantly surprised to find out they were.  The rest of the sculpt does a quite nice job of capturing Kuiil’s attire from the show, varying up the textures for the various different pieces of clothing, and adding some nice depth to the sculpt where possible.  Kuiil’s paint work is, for the most part, pretty basic.  The head again gets the best work, with the face printing working well with the sculpted elements to really nail that likeness to the prosthetics.  The rest of him is really on the straight forward side, with just solid colors.  I do feel he might benefit from some more accenting, to really sell that used universe look, but at least the sculpt does its part to keep things going.  Kuiil’s only accessory is his rifle.  It’s a nicely detailed piece, which fits well in his hands, but, like Greef, it winds up feeling pretty light for the price.  I might have liked to get maybe some of his tools, or even a tea set to go along with our IG-11 figure.  Just something extra to sweeten the pot a little bit.  But, again, he does at least get bare minimum.

I’ve pretty much been wanting a Kuiil figure since episode 1 of the show (before I even knew his name, mind you), because I really dug the character.  I had been sort of crossing my fingers for maybe a deluxe release packed in with a Blerg, but getting him on his own isn’t so bad either.  Lack of extras aside, there’s a lot I like about this figure, and at his core he’s just really solidly done.  He’s honestly my favorite figure from this assortment.  I have spoken.

Thanks to my sponsors at All Time Toys for setting me up with this guy for review.  If you’re looking for Black Series, or other toys both old and new, please check out their website and their eBay storefront.