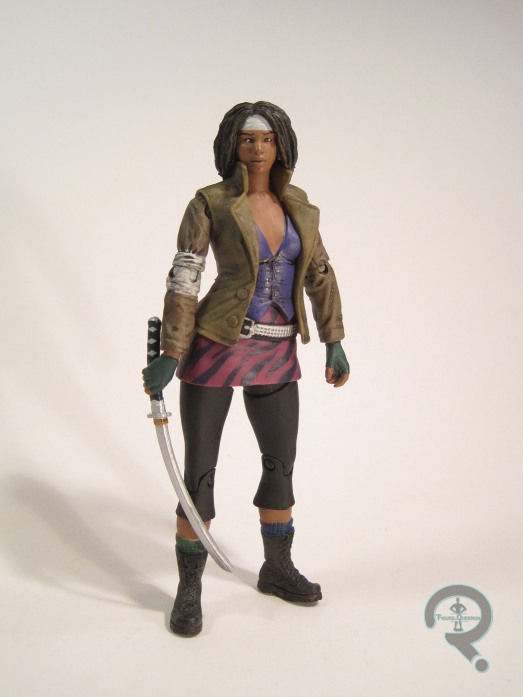 So, I guess The Walking Dead TV-show starts up soon.  Or maybe it already started back up.  I don’t actually know, because I haven’t watched the show since about fifteen minutes into this season’s premiere, nor will I be going back.  But, I’ve still got all these figures, so…yeah…  Here’s Michone.

Michone was released in the first series of McFarlane’s comic-based The Walking Dead line, which hit around the same time as the TV show’s series premiere.  The figure stands about 5 inches tall and has 18 points of articulation.  So, right off the bat, there’s the weird scale thing.  I’ve looked at the TV line and one or two of the comic figures, so the scale’s not new to the site, but it was actually new to this particular line.  It was an odd choice to say the least, since the rest of the industry was doing either 3 3/4 or 6-inch scale at the time.  McFarlane’s gotta be different.  Michone is based on her first appearance from the comics, which is a fairly standard look for her, but at the same time a bit gaudy compared to the character’s look as the series progressed.  The sculpt is alright, I guess.  It certainly wasn’t as bad as some of how of the other figures from the earliest days of this and the TV line.  That being said, while the sculpt isn’t bad, it’s also

kind of boring.  The pose is just sort of her standing with her hand holding the katana downwards.  There’s also pretty much no trace of Charlie Adlar’s art style in the sculpt; she instead looks like just some generic sort of super model or something.  Not exactly very indicative of Michone as a character.  I guess it could be worse, though.  She’s not the ultra-hideous figure that the first Rick was.  At the very least, the paint on Michone is actually pretty solid.  The colors are vibrant, which works surprisingly well, and all of the application is very clean.  Miocene was packed with her katana, a power drill, and a spoon.  The sword is pretty much expected, but the drill and spoon are some pretty fun issue specific pieces, even if she didn’t use them in this outfit.

I bought the corresponding Rick figure from this line first, which didn’t really make me want to pursue any of the others.  But, Cosmic Comix had their biggest sale of the year going, and she was 40% off, which was enough for me to go for it.  It’s hard to get super excited about this figure, but she certainly could have been far worse.