“Through the course of many lives and deaths, Moira MacTaggert pursues justice for all mutants.”

Introduced by Chris Claremont and Dave Cockrum in X-Men #96, Dr. Moira MacTaggert would serve as a rather prominent supporting character in the X-Men universe until well into the ’90s.  She was a notable human character amongst the book’s largely mutant cast, and even more notably, a human who not only didn’t hate mutants, but was actively seeking to help them….that was, until “House of X” went and revealed that Moira wasn’t a human at all, but was instead a mutant with the ability to reincarnate and relive her life over and over, but exactly in such a fashion that her mutant nature was undetectable through all usual means of detection so as to not openly violate the four decades of history of the character being, you know, not a mutant.  Look, I have feelings about this whole thing, and they’re definitely mixed.  But, I mean, it means that Moira is prominent again, and it means she got an action figure, and isn’t that what matters the most? 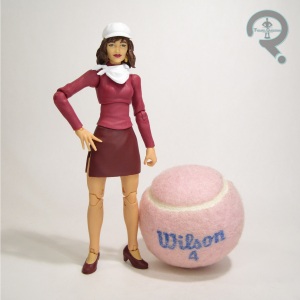 Moira is figure 4 in the Tri-Sentinel Series of Marvel Legends.  Like the others in the set, she’s based on “House of X”, specifically on Moira’s look from her current life/timeline.  While I personally would prefer her jumpsuited look from the ’70s, I guess this one’s okay too.  The figure stands a little over 6 inches tall and she has 27 points of articulation.  Fortunately, her articulation’s more useful than yesterday’s Jean Grey, which is a definite plus.  Moira’s largely built out of the same bank of parts as last year’s Gwen Stacy figure, but with a new head and coat piece, as well as the Peggy Carter shoes again.  The shoes at least make more sense here, and it’s possible their use here is why they showed up on Jean as well.  The re-used parts work well for the look they’re aiming for, and the new head and jacket likewise match up pretty well for the character.  The default head is sporting glasses, which are a thing that Moira had occasionally, though they again aren’t necessarily out of place for the character.  They’re also well-rendered, especially for the scale, and the really look quite nice.  The jacket piece sits just a touch high on the shoulders, but is other wise a nicely sculpted

piece. They’ve even sculpted the pens in her pocket.  Moira’s color work is a bit more subdued than the usual Legends figure, but it matches the source material, and it’s again pretty solid for the character.  The paint work is pretty basic, but it hits all the right marks and the application is pretty clean and sharp.  In terms of accessories, Moira’s pretty well packed.  She gets a spare head, arms, hands, and a neckerchief piece, allowing for a rather different second look for the character, based on her less scientific attire from the miniseries.  It’s not my bag personally, but getting an extra look’s really not a bad thing.  Moira also includes a scientific textbook of some sort, as well as the left leg of the Tri-Sentinel Build-A-Figure.

Moira’s pretty rooted into the ’70s-’80s X-Men run, as well as the ’90s cartoon, which are really my main sources of X-Men, so I definitely like the character, but the concept of getting her as a toy seemed rather unlikely, given her typically less action oriented role in the franchise.  Personally, I’m not much of a fan of the move to make Moira a mutant, as I feel it removes some of what’s special about the character, but at least her increased roll gave Hasbro a good excuse to make a figure of her.  It’s honestly a pretty solid figure, and one of the bigger draws to this set for me.  I’ll still keep holding out for a ’70s version, but given how slim the chances of getting that one are, I can at least make due with this one.

Thanks to my sponsors at All Time Toys for setting me up with this figure for review.  If you’re looking for Marvel Legends, or other toys both old and new, please check out their website and their eBay storefront.