Oh, we are just keeping these Transformers hits coming, aren’t we?  Well, if you guys were hoping things might angle back into slightly more known characters as we got further into the week, you were sadly mistaken.  It’s just the oddballs from here.  A while back, I brought up the concept of region-exclusive characters, and specifically talked about Impactor, a UK-comics-exclusive Transformer who led the UK-comics-exclusive Wreckers, who also incorporated some non-exclusive characters into their ranks.  The Wreckers have subsequently become not so region-exclusive, and in 2010 IDW published “Last Stand of the Wreckers,” a mini-series focused on them.  They were envisioned as a team on a suicide mission, so they needed a lot of expendable fodder.  And wouldn’t you know it, there was old Rotorstorm, just sitting there doing nothing. 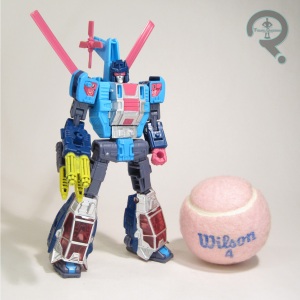 Rotorstorm is Generations Select release for Earthrise.  He started showing up towards the tail end of July/beginning of August.  He’s patterned on the character’s G1 design, but also takes some very definite influence from his appearance in “Last Stand of the Wreckers.”  In his robot mode, the figure stands about 6 inches tall and he has 26 workable points of articulation.  Structually, he’s mostly the same as the Siege Spinister figure.  That said, I never got a Siege Spinister, so he’s all-new to me.  The articulation on this mold in robot mode is pretty impressive, and certainly among the best I’ve gotten from this line.  Beyond that, it’s just a pretty impressive piece, albeit one that doesn’t *quite* line up with the character’s true G1 design, at least as far as the body is concerned.  His head, on the other hand, is all-new, something that Hasbro proudly advertised…before showing off a prototype that inexplicably had a repainted Spinister head.  It’s alright, though, because the final product has the proper head, and it’s a nice recreation of Nick Roche’s illustrations of the character from “Last Stand”. 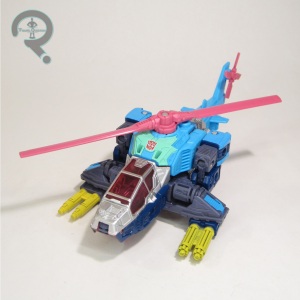 With a name like “Rotorstorm”, it’s not all that hard to piece together the guy’s alt-mode.  Just like his mold-mate Spinister, he turns into a Cybertronian helicopter.  The transformation process is slightly more complicated on this guy, and definitely more than a little bit fiddly.  It’s not really one of my favorites. On the plus side, the end result is still a pretty cool helicopter mode, with a spinning rotor and everything.  Rotorstorm’s color scheme is a bit on the garish side, but it’s faithful to the original colors; what else would you expect from an early ’90s Transformer?  Rotorstorm includes two guns, which can be held in robot mode or mounted to his sides in helicopter mode.  They’re the same ones included with Spinister, which also means the layout of the molds makes them two different base colors.  They aren’t drastically different, but it’s still, you know, different.

I never made up my mind as to whether I actually wanted Spinister or not.  I didn’t really care for his renders, but seeing a figure in-hand has changed my mind about such things before.  Then I never actually did see him in-hand, and that kind of took the decision out of my hands, I suppose.  When All Time got in this guy, Max was nice enough to let me take a look at him and make the decision for myself.  Ultimately, I’m happy to have missed out on Spinister, because it means I was a bit more open to getting this guy, and I actually think I like his overall design just a bit better.

Thanks to my sponsors at All Time Toys for setting me up with this figure for review.  If you’re looking for Transformers, or other toys both old and new, please check out their website and their eBay storefront. 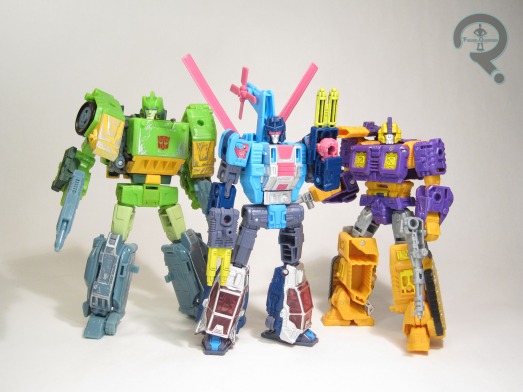