So, last day of Walking Dead stuff (at least for a little while). In my review of Carol, I mentioned how the TV Show has really turned around my opinion of some of the comic characters who have made the transition.

The Governor in the comics generally seems to be a rather popular character. However, I’ve never really cared for him. To me, his over the top nature and the fact that he was completely devoid of any likeable traits just made the character rather annoying to read. In the show, he was given a much quieter demeanor and numerous episodes focusing on his rationale for the things he did. He was still a bad guy and he was still crazy, but he was a wildly more intriguing character. So, let’s have a look at the figure!

The Governor was released in Series 6 of The Walking Dead TV-based line from McFarlane Toys. This marks the second Governor figure in the TV line, following his first figure in Series 4. The figure is a little over 5 inches tall (David Morrissey is a tall dude) and he has 23 points of articulation. Sadly, he’s the only (human) figure in this series not to get the new style hip joints, but his long coat would have restricted them anyway, so it’s not too bad. The first Governor figure was based on his look in early Season 3 (though a later look was possible with the extra eye-patched head), where as this one depicts him after he’s begun to sink more into his villainous side. In his default setup, this figure depicts the Governor from smack-dab in the middle of Season 3, but it can also represent the character’s later appearances. Starting with Series 5, each series of the line has one figure that’s built on a previous figure. The Governor takes that spot in this series. He makes use of the pelvis, legs, feet, and hands of the Series 4 Governor, as well as a slightly retooled torso, an all-new head and arms, and an add-on for his coat. Issues with the old hip articulation aside, the re-used pieces were all pretty good the first time around, and they add some nice consistency between the two figures. The new pieces are quite well sculpted, which is really great. The new head sits just a little bit too high on the neck, but the coat collar covers the issue for the most part, and the head itself is pretty fantastic. The head is really well detailed, and it’s a very good likeness of David Morrissey. Paint seems to be a pretty consistent issue with The Walking Dead figures, and the Governor is no exception. There’s a bit of slop, especially around the edges of the bandaging on the head, and the hands and lower face both have a rather inconsistent wash. Other than that, the paint is actually pretty good; the clothing is sufficiently detailed, and there’s lots of work done to bring out the details of the sculpt. The Governor includes an alternate head with an eye-patch (the same as the one included with the last Governor), an assault rifle, a handgun, and a knife. While the alternate head presents a more default look for the Governor, it’s not as well sculpted or as well painted as the bandaged one; it looks a little like his face is sliding off. The assault rifle is a nice piece, but the figure has some serious difficulty holding it, meaning he’s pretty much limited to the knife and the handgun.

The Governor was ordered via Amazon, along with Rick and Abraham. I have to admit, he was probably the figure I was least interested in this series, for whatever reason. In hand, that all changed. I can’t say that the Governor’s really any better than any of the other figures in the series, but for whatever reason, I just really like this figure. He just looks really cool! 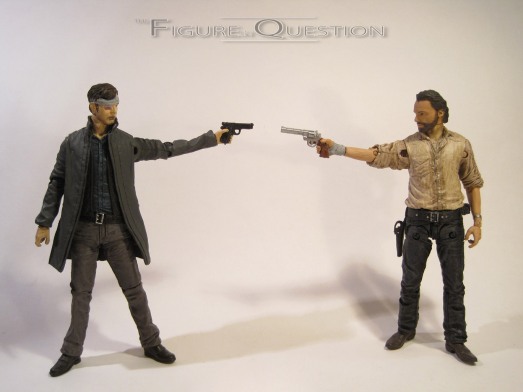