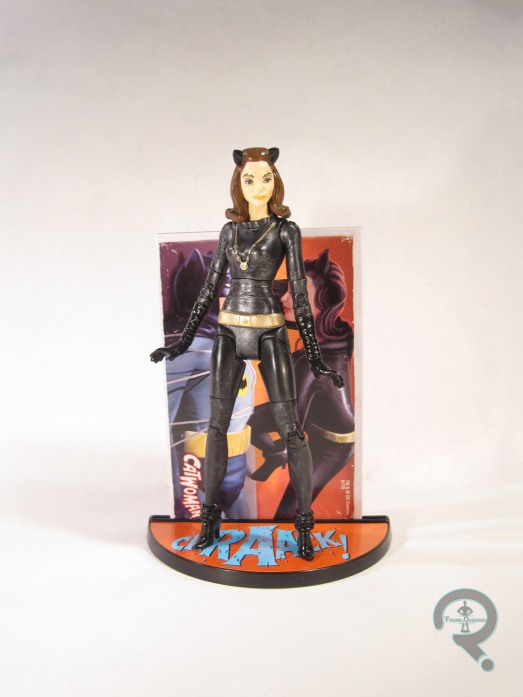 Today, I’ll be taking a look another new addition to my collection.  It’s Catwoman from Mattel’s Batman ’66 line, which I have yet to look at on this blog, so this’ll be a first.  Awesome.  I’m going to assume everybody knows Catwoman, but if you don’t know the 1960s Batman TV show this version is based on, you should definitely read up on it.  It’s a lot of fun.

This figure is obviously based on Catwoman from the 1960s show, but specifically, this one’s based on Julie Newmar’s portrayal of the character.  I’m more of a Lee Merriweather fan myself, but Newmar was the first, the longest running and is typically the best remembered Catwoman by fans of the show, so she was a good choice to do right off the bat.  Catwoman was released in (kind of) the second series of the Batman ’66 line, although she was released separately from the other two figures in the series.  She stands roughly 6 inches tall and has 22 points of articulation.  Unlike many of Mattel’s previous DC lines, which rely heavily on reuse, Catwoman is an all new sculpt.  Admittedly, it’s one of the better sculpts they’ve done, in that it does come fairly close to a real woman’s proportions, which is a nice change.  It’s not perfect, mind you, but not terrible.  The head sculpt is also well done, with more than a passing resemblance to Julie Newmar.  Unfortunately, the paint doesn’t quite live up to the sculpt.  It’s not terrible, but the face especially is really thickly painted, and the eye lashes and eyebrows are painfully obviously patterned designs.  None of this ruins the figure, but I can’t help but think that the likeness would increase ten-fold with a better paintjob.   Catwoman also includes a sound effect labeled stand and a character card featuring a screen cap from the show.  The stand is the same as every other stand in the line, but Catwoman’s reads “CRRAACK!” like the sound a whip would make, making it a good fit for Catwoman.

I acquired my Catwoman figure from Amazon, like the other Batman ’66 figures, when they all went up for preorder.  Amazon has quickly become my go to for ordering toys because it just makes life a whole lot easier!