Today is part 2 of 3 of my review of the latest wave of Marvel Minimates.  The wave is themed around Captain America, and I’ll be looking at two of his compatriots, both of whom are set to get pivotal roles in the upcoming Captain America Sequel.  It’s the Falcon and Winter Soldier!

These two were released as part of the 54th wave of the Marvel Minimates line. 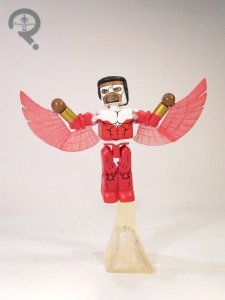 First, my favorite part of the set, Sam Wilson aka the Falcon.  Oh, sorry “Marvel’s Falcon.”  ….TM….  The Falcon is depicted here in his more modern outfit, specifically the one he wore during Brubaker run on Captain America.  I would have preferred his classic outfit, but after 54 waves with no Falcon at all, I’ll take what I can get.  Falcon is built on the standard Minimate body, so he stands about 2 ½ inches tall and has 14 points of articulation.  Falcon features 5 sculpted add-ons:  2 2-piece wings, and a hairpiece.  The hair looks to be new to this figure and the wings were originally sculpted for the Vulture  in the Spider-Man Friends and Foes boxed set.  I would have liked for the mask to be separate piece, so I could swap out the face for one without a goatee, but it looks okay.  The paint isn’t perfect, but it’s serviceable.  The work on the face is sharp, but the body doesn’t quite match up, with some fuzzy lines and a little bit of slop.  Falcon includes his sidekick Redwing, a flight stand, and a clear display stand. 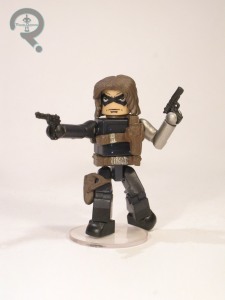 Next, it’s Cap’s former sidekick-turned-Russian-Assassin (umm…Spoilers?), Bucky Barnes aka the Winter Soldier.  There used to be a joke that nobody stayed dead in comics except for Uncle Ben, Bucky and Jason Todd.  I am eagerly awaiting the big summer event that brings back Uncle Ben.  Winter Soldier is depicted in his look he sported during the initial Winter Soldier arc.  The key difference between this look and more recent ones is the longer hair and the red star on his robot arm. Winter Soldier is built on the standard body, so he’s got the regular stats.  He features 4 sculpted add-ons: Hair, shoulder holster, belt, and leg holster.  The hair was originally used on Warpath and the shoulder holster originated on the wave 42 SHIELD Agent.  The belt and leg holster look familiar to me, but I can’t figure out for sure where I’ve seen them before.  The leg holster doesn’t quite keep the gun in place, which can get a bit annoying.  The paint is well done on this figure, with no noticeable slop.  The facial expression looks pretty dead-on for the character, with a dead-set determination.  Winter Soldier includes 2 different handguns, a sniper rifle, and a clear display stand.

This set was part of a larger order I placed with my favorite Minimates retailer, Luke’s Toy Store.  This was one of the sets I was most looking forward to in the wave, as both of these characters are long overdue.  I still hope to get a more classic Falcon down the line, but this one should do all right in its place.  And Winter Soldier is certainly no slouch either.