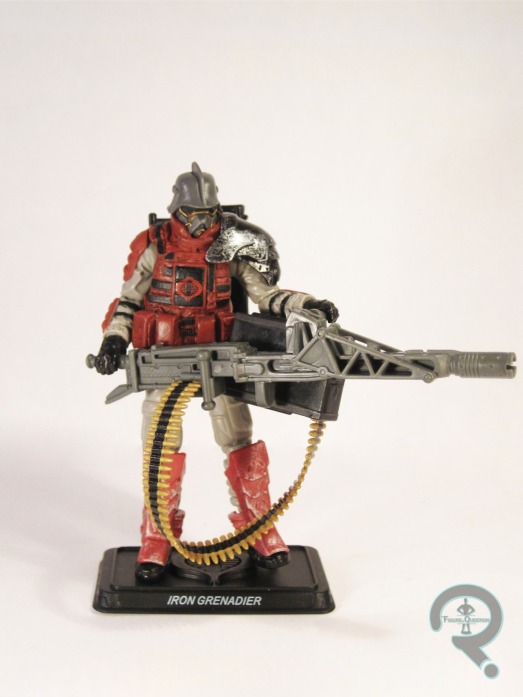 I’ve done a fair number of reviews based around Hasbro’s 3 ¾ inch re-imagining of GI Joe under the A Real American Hero name. It’s ranged from the early 2000s re-launch as GI Joe VS Cobra, which was followed by GI Joe 25th Anniversary, which was in turn followed by the tie-in line for 2009’s GI Joe: Rise of Cobra. Following the return to the non-movie themed toys, Hasbro first introduced Pursuit of Cobra, before jumping into GI Joe 30th Anniversary. No points for guessing why they went with that name. Today, I look at an Iron Grenadier, a member of weapons supplier Destro’s personal army.

The Grenadier was released as part of the first wave of GI Joe 30th Anniversary. It’s a slightly tweaked version of the same figure’s release in the Pursuit of Cobra line. Both figures are a more armored re-imagining of the classic Grenadier design. The key difference between the two is this version’s lack of camo-paint on the gray parts. The figure stands 3 ¾ inches tall and has 20 paints of articulation. The articulation is a bit hampered by some of the sculpted parts, but that’s to be expected. The Iron Grenadier is actually crated from totally reused parts, but they’re a smart re-use. The head comes from the previous 25th version of the Grenadier, and the body is from the armored up version of Destro released in the Pursuit of Cobra line. This means that the troops matched the newer version of Destro, while still fitting with the previous Grenadiers, which is definitely cool. All of the sculpted pieces are really great, and tremendously detailed. The paint work is pretty good on this figure, though he is hurt by the lack of detailing on the gray parts. Given the high quality work on the rest of the figure, he almost looks unfinished. The Grenadier includes a display stand with his name and the Cobra symbol, a backpack, a smart-gun, bullets, and a bullet case. All in all a solid figure.

I hadn’t really planned on getting the Grenadier, but I decided to order a full set of the first two waves of 30th from Big Bad Toy Store, so I ended up getting him with the set. I don’t regret the purchase, as it’s a pretty cool little figure, and a great addition to the Cobra ranks. It’s not quite as good as the Pursuit of Cobra version, but it’s still good on its own merits.