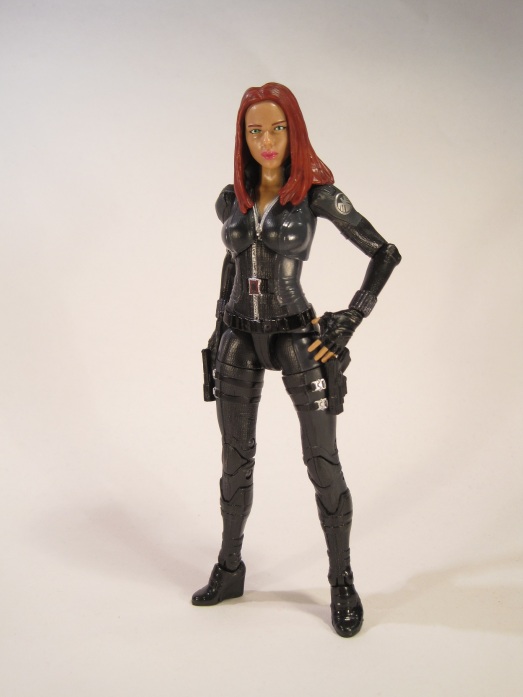 Toy companies have long insisted that female action figures don’t sell as well as male action figures. So, their response to fan demand is usually one of two things: they shortpack the figure, making it impossible to find, or they put no effort into the figure, making it a monstrosity nobody wants. Or they do both (case in point: Marvel Legends Scarlet Witch. Eughhh…). These actions lead to female figures not selling as well, which leads to companies saying they don’t sell well, which leads to shortpacking and poor figures. Which leads to, you guessed it, bad sales. It’s one of those self-fulfilling prophecy things.

Anyway, this mentality lead to Black Widow being the only team member absent from Hasbro’s 6-inch scale Avengers line, meant to tie-in with the 2012 movie. It was really annoying, but Hasbro said they’d make it up to us. When the Captain America: The Winter Soldier figures were announced, they informed us that Widow would be including two heads, so she could be displayed from either movie. How could it go wrong? Well, Hasbro decided to pack Widow one per-case. For a ratio, there are eight figures in a case, and three of them are Captain America. To make matters worse, Widow included the most essential piece to the line’s Mandroid Build-A-Figure. Fortunately, Hasbro seems to be learning, and has announced that they will be sending out revision cases with Cap, Widow, and Winter Soldier all evenly packed. Maybe their starting to get it…

Black Widow was released in the second series of Captain America: The Winter Soldier Marvel Legends Infinite Series. The figure stands a little under 6 inches tall and has 24 points of articulation. She’s actually a bit too tall, which is the reverse of the problem that most female figures suffer from. It doesn’t ruin the figure, but she’s almost as tall as Cap, and there’s a difference of almost a foot between Scarlet Johansen and Chris Evans in real life. The figure appears to have a brand new sculpt, and it’s a very nice sculpt at that. I’m not sure if I like the body sculpt quite as much as Hasbro’s Spider-Girl sculpt, but it’s a very close second. Like that figure, she has very nice, mostly realistic proportions. Her stance is perhaps a bit too wide, but other than that, everything looks pretty good. The basic TWS head is a great sculpt, and it looks pretty much spot on to what Ms. Johansen looked like in the movie. The long hair is a little bit restricting to the neck articulation, but that’s understandable given the style. It certainly isn’t as bad as it could have been. In the paint department, Black Widow lucks out compared to the previous two figures I’ve looked at. There’s still a bit of bleed over in a few spots, but she seems to have less of the fuzzy lines and slop of the other two. She includes an extra Avengers-styled head, an extra set of trigger finger hands, and the Mandroid torso. The head is a nice touch, given Widow’s absence from the 6-inch Avengers line and the closeness of the costumes. It looks like the same face with new hair, and it looks pretty good, though the hair might be sitting a smidge too high on her forehead.Widow also includes two pistols…sculpted into their holsters. Remember how I said she had trigger fingers? Yeah, she has nothing to hold in them. It’s seriously disappointing and mars an otherwise great figure.

Widow was part of my set of Series Two figures from Big Bad Toystore. She is the primary reason I bought the set, as I wasn’t going to fork over almost $60 for just her. She definitely lives up to the hype she’s gotten. It’s a great representation of Widow. She’s a great action figure in general. This is the second Hasbro female I’ve given that assessment is the last week. They’re definitely on to something here! However, the figure is hurt by the lack of firearms. I ended up finding a suitable handgun in my spare parts bin, but not everyone has a spare parts bin. 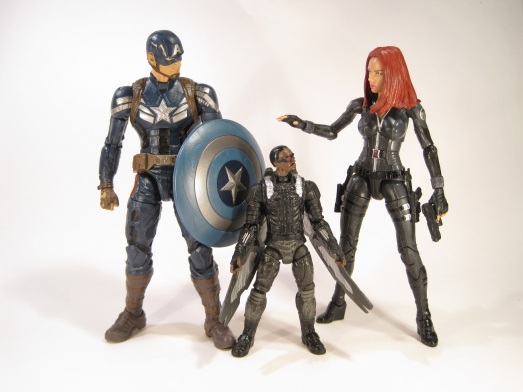