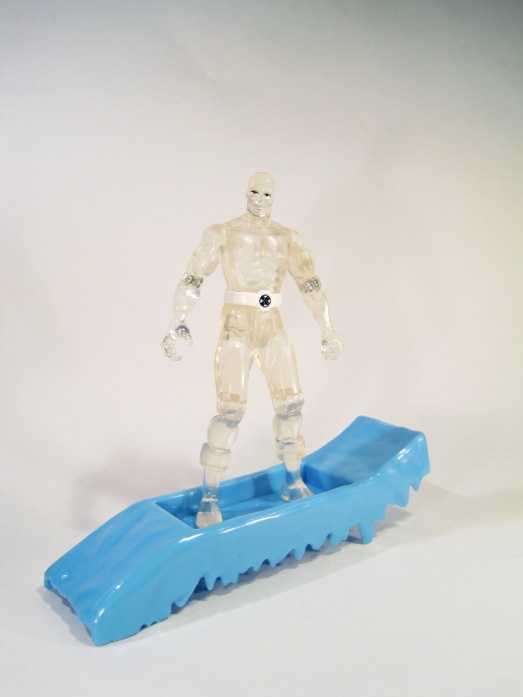 I’m not quite sure how much I’ve touched on this, but Toybiz’s X-Men line from the 90s was incredibly important to forming my collecting habits. It was a very expansive line, and offered me the opportunity to own almost every character from the 90s cartoon in plastic form. To this day, it remains one of my all-time favorite lines of figures. Sure, some of the figure’s haven’t aged the greatest, but they instill me with lots of fond memories. Today, I’ll be taking a look at the coolest X-Man around, Iceman! 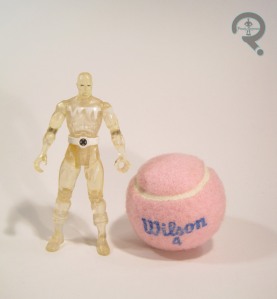 This version of Iceman was actually released twice. Once in the third series of Toybiz’s X-Men line, and later as part of another X-Men line released exclusively to Kaybee Toys a few years later. This particular is from the later release, but the two figures are virtually indistinguishable. The figure stands just shy of 5 inches tall and features 9 points of articulation. The figure is based on Iceman’s classic design, but the cuffed boots seem to indicate his late silver age design. The figure is molded in clear plastic so as to replicate Bobby in his full ice mode, after he learned how to actually transform himself into ice. The sculpting is actually pretty good for an early 90s piece, though his hands do seem a little bit on the large side. Still, the figure has a grade blocky sculpt that really makes him look like he’s been chiseled out of ice. The paint work is pretty simple but what’s there is pretty good. They’ve used some white paint to do some “icicle” detailing. It looks a bit strange to be honest, but it’s not too apparent when the figure is on display. Iceman includes a stand shaped like an ice sled. There’s a block around the foot pegs that could be filled with water, which could in turn be frozen around the figure’s feet, allowing you to make an actual ice sled. It’s gimmicky, but it’s an entertaining gimmick at least.

This figure was purchased in the Balticon dealer’s room this past Memorial Day. This is actually the second of this figure I’ve bought. I got the first one years ago from Kaybee Toys. However, I used that one’s freeze gimmick numerous times, and little did I know that this would cause the figure’s clear plastic to become more brittle. My poor first figure’s legs bot snapped off at the hips, which was a serious bummer (that’s actually him in the Wilson photo; you can even see the apoxy holding his legs in place). When I saw this figure in a box with a bunch of other 5 inch X-Men, I was more than happy to once again have this guy in my collection. I certainly won’t be putting this one in the freezer!