In the 90s, any DC toyline whose title didn’t include “Batman” was a rarity. In fact they were almost non-existent. Even today’s focus line Total Justice was originally called Batman: Total Justice. And this was a line that didn’t even really focus on Batman! I guess Kenner must have come to their sense by the time the line actually saw release, because the packaging dropped Batman’s name from the title.

Anyway, Total Justice was essentially a line based on the Justice League. Years later, the line would even be continued under the name JLA. The line offered many collectors the first chance since Super Powers to actually have a decent line up of DC characters, but it was plagued by silly “Tactical Armor,” a lack of decent articulation, and, most famously, X-Treme! poses. However, it was the only chance at getting those characters for quite some time, so collectors had to grin and bear it. Let’s have a look at one of the line’s more obscure additions, Black Lightning! 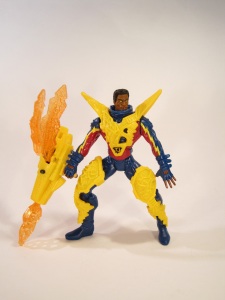 Black Lightning was released in the third and final series of Total Justice. This series was easily the most daring series of the line, as it lacked any heavy hitters. Black Lightning stands about 5 inches tall and features 5 points of articulation. The figure depicts Lightning in his costume from the time, which deviated a fair bit from his other costumes. It’s not a terrible design, but it’s easily my least favorite look of his, which hurts the figure a bit. Black Lightning featured an all new sculpt, though the arms and legs would be slightly retooled to be used for JLA’s Impulse and Superboy, respectively. The sculpt is actually rather reserved by Total Justice standards. The legs are in a slightly wonky pose, but the arms are actually in a pretty natural stance, and the face is surprisingly calm for this series. The paint work is rather simple, but it’s mostly evenly applied, with no real issues present. Black Lightning included torso and leg armor, as well as a big missile launcher thing. While this series was the first of Total Justice to give figures more sensible accessories, Lightning was not as lucky as his peers, and got stuck with the same usual wacky stuff.

Black Lightning was the Total Justice figure I was always missing. There are other figures from the line I still don’t have, but this one was the only one from the final series, and he was also one of two heroes not to see a re-release in the JLA line (the other was Hawkman. I think it mostly had to do with the dated designs the figures sported.) So, when I finally found him at my local comicbook store a few weeks ago, I was happy to get one. Not thrilled or anything, but content. Sometimes, being content is enough.