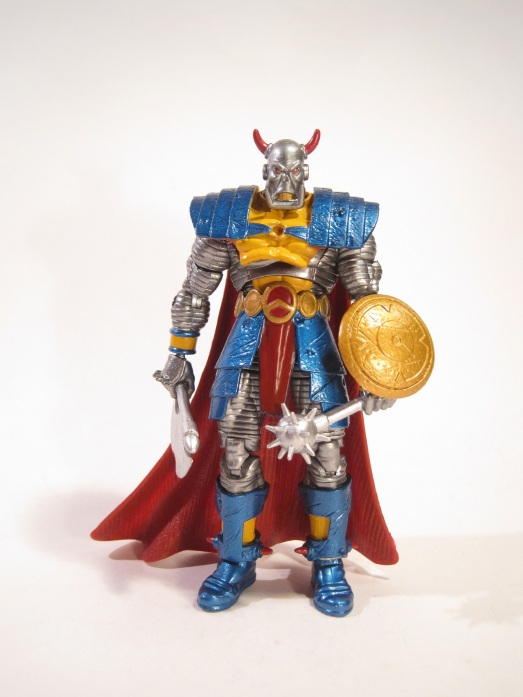 Would you believe me if I told you that I had definitive proof that Transformers and Doctor Who share the same universe with just about every Marvel Comics super hero? Because they do, thanks to a set of appearances by one character: Death’s Head. As you clearly see in the title, he’s Marvel’s Death’s Head (which has two possessives. If I want to talk about the clasp on his cape, I’m talking about Marvel’s Death’s Head’s cape’s clasp. Think about that for a while…). Death’s Head was created for a Transformers comic while Marvel held the license. Not wanting to potentially lose a unique character to Hasbro, they quickly created a short strip featuring the character that was published in several of the comics in their UK line. Marvel also happened to be publishing a Doctor Who comic at the time, which also saw an appearance from Death’s Head before he finally made his way to the main Marvel universe. Now, 27 years after his original appearance, he’s finally gotten his very own action figure made by…. Hasbro. How about that?

Death’s Head was part of the second series of Hasbro’s Avengers Infinite, the line which serves as a replacement for Marvel Universe. He was long rumored to be an upcoming figure in the MU line, so following that line’s cancellation, the figure’s fate was uncertain. Fortunately, he found a home in AI, so everybody still has a chance to have a toy of their favorite tri-dimensional bounty hunter. He stands just over 4 inches in height and features 27 points of articulation. Death’s Head makes use of the MU Colossus body as a starting point, reusing the arms, upper and lower torso, and legs from the boot up. Given that both characters are larger in stature and both feature a similar banded metal patter, the choice of re-use is inspired. In addition to these pieces, the figure also has brand new pieces for his head, hands, shins, and feet, as well as add-ons for the cape/shoulder-pads and the belt/loincloth/waist armor. The new pieces are really great sculpts. The head sculpt looks to have been lifted directly from the character’s comic appearances, and the armor pieces have some really wonderful denting and weathering. My only complaint is how loose the cape add-on is, as it causes it to sit incorrectly if you aren’t careful. The paintwork on Death’s Head is nice and clean for the most part. There’s a bit of bleed over here and there, but nothing too distracting. The metallic blues in particular make the figure really pop. Death’s Head is armed with an axe, a mace, and a shield, all of which are new pieces that look pretty great and fit the figure’s hands well.

Like Deathlok and Valkyrie, Death’s Head was picked up from my local comicbook store, Cosmic Comix. Like Valkyrie, Death’s Head is a figure that I’ve wanted since the initial rumors of his release started cropping up. I’m not entirely sure why I’m so interested in the figure. I’ve read maybe two or three of Death’s Head’s comic appearances. I guess something about the character’s design just resonates with me. Unsurprisingly for a character designed for a toyline-tie-in, Death’s Head translates really well to the action figure format and makes for a pretty neat toy. 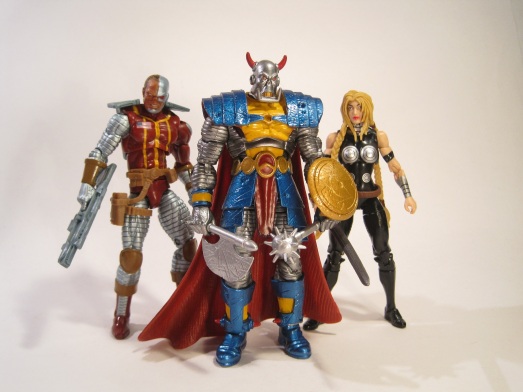