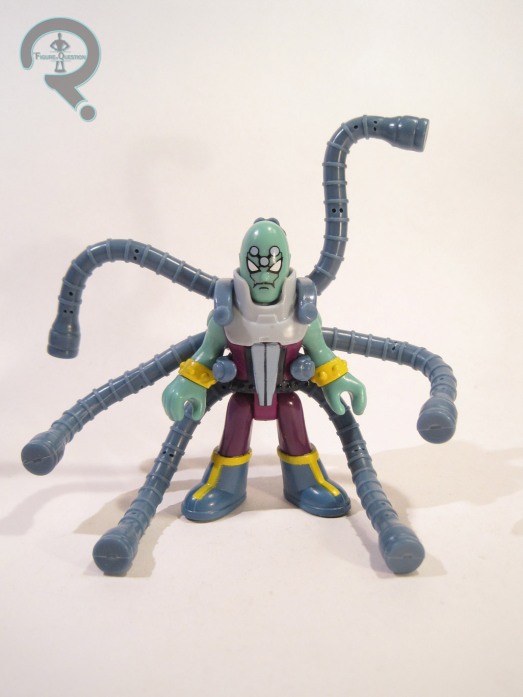 In the current, extremely adult collector driven action figure climate, it can be easy for toy companies to overlook kids, their original target audience. As figures have become more detailed, they have also become more fragile. And that’s to say nothing of the virtually impossible task of getting certain figures. Fortunately, toy companies are starting to catch on, at least a little bit. It’s no secret that I have my issues with Mattel, especially their handling of the DC license, but they aren’t always the worst people on the planet (just most of the time). One of the few places they don’t suck is their Fisher Price division, which handles their Imaginext brand. Imaginext offers a variety of different figures, meant to stand up to younger kids. In recent years, they’ve had a rather nice selection of DC heroes and villains, all offered in the line’s streamlined style. Today, I’ll be looking at the line’s take on Superman foe Brainiac. 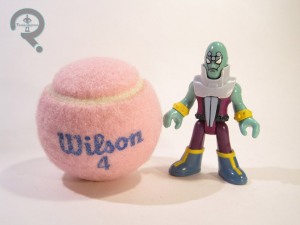 Imaginext doesn’t use the usual “Series” structure of most toylines; instead they have a variety of figures of differing price points and sizes, and they add a few new figures at a time as the line progresses.  Figures are usually sold either in two-packs with other figures or packed in with vehicles. However, Brainiac breaks from this tradition, being released by himself, as something of a deluxe figure. He was introduced into the line in 2014. The figure stands about 3 inches tall and he sports 8 points of articulation (the legs move as one, so just one point there). Brainiac is clearly inspired by his appearance in the DC Animated Universe shows, with a couple of small tweaks; they’ve given him bare arms and his skin is a much greener color. While I still have a soft spot for the classic short-shorts and white go-go boots combo of the 60s, I can’t argue with the choice of design. The DCAU look is definitely a strong one, and it’s probably the most prominent of the character’s appearances in recent years. I’m no expert on Imaginext figures, but Brainac appears to be an all-new sculpt. The figure offers a nice translation of the animated design, and the sculpt is definitely some solid work. Certain details, such as the figures face (apart from the nose), have been left blank on the sculpt. The paint has then been used to bridge the gaps. There are a few areas of slop, but the paint work is generally clean. The best work is definitely on the face, which is nice and clean, and very nicely depicts Brainiac’s cold, calculating mug. Accessories are a rarity among the Imaginext figures, but as a deluxe figure, Brainiac gets a set of robot tendrils, which can be clipped onto his back. While they seem a bit more Doctor Octopus than Brainiac, the character has sported such attachments before, and I certainly won’t complain about extra accessories.

Brainiac was another gift from my parents, and he shows how much attention they pay to my never-ceasing ramblings about toys. While walking through Target a few months ago, I saw the figure and off-handedly mentioned that he was rather cool, and boom, here he is. He’s not the first Imaginext figure I’ve owned (I have a few of the Green Lantern-related ones), but, for whatever reason, he’s the first of them to interest me enough to actually open him up and play around with him. Brainiac is a really fun little figure, and he’s the kind of toy that there should be more of.