We’ve made it to Day Twelve of the Christmas Reviews and after today, there are just two days left. Today marks the last of the Alien-themed gifts from this year. This time around, it’s a slightly different type of Alien figure. This one comes from Bandai Japan’s S.H. MonsterArts line, which is a Monster-themed spin-off of their main FiguArts line. Usually, the line focuses on Japanese creatures, such as Godzilla, but in the last couple of years they’ve added a healthy dose of Alien and Predator figures. Today, I’ll be looking at their version of the original Alien, the Big Chap! 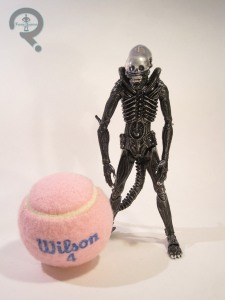 As noted above, the Big Chap was released as part of the S.H. MonsterArts line. Like many of Bandai’s higher-end figures, the Big Chap is not part of a larger series or assortment; he’s a single release. The figure is about 5 ½ inches tall and features an astounding 61 points of articulation (20 of that’s in his tail!). Technically, he’s based on the creature from the first Alien movie, though, like Funko’s recent Metallic Alien, he’s actually based on the initial design of the Alien, prior to filming beginning and the dome being “misted.” Prototype shots show the dome looking like it does in the movie, but it’s completely clear on the final figure. I don’t mind, but I’m curious as to why they decided to change it. The Big Chap’s sculpt is very nicely done, and all of the detail work is nice and sharp (quite literally in some cases). There’s a definite style to the figure, which makes it fit in with the other MonsterArts figures, even if it has a unique design. The design is a little lankier and more bug life than the “real-life” Alien, which is properly in line with the idea of this being a “concept” figure. The figure sports die-cast metal pieces for the elbows, knees, and the tip of the tail. In the case of the elbows and knees, it helps make the figure a little bit sturdier, and in the case of the tail, it makes it appropriately strong and sharp. Like all the best Alien figures, it also has a secondary mouth, which you must “Please pull out in a state of downward face” according to the included instructions (which are a fantastically entertaining read, by the way. Did someone on staff just say “Hey I sort of know some English” and then have nobody double-checked them?) The piece is very nicely sculpted, though it would be nice if it were a slightly tighter fit; it kind of flops about as it is. Like so many Alien figures, there’s not a whole lot to be done with the paint, but what’s there looks nice. For the most part, the figure’s molded in black plastic, with a heavy silver dry brushing applied to help bring out the details. There’s also some pretty good paintwork on the skull under the dome, as well as some nice silver detailing on the claws, toenails, and teeth. The Big Chap included a spare set of hands, in a more gesturing pose than the regular pair, and a display stand. The stand is cool enough, though I’m a little thrown off by the splattered paint design of it, which doesn’t really fit with the style of the movies at all. But I guess it looks pretty cool.

The Big Chap here was a Christmas gift from my boy Tim. Tim’s well aware of my Alien obsession, and had asked me a few months back whether the Aliens I owned were all NECA, in preparation for ordering this figure. As far as Alien figures go, he chose pretty well. This is a really great version of the original Alien. Plus, there’s that fantastic reading material too!