GUARDIANS OF THE GALAXY VINYL FIGURES

Alright, so after the detour into Marvel Legends land, I’m coming back around to Funko’s Guardians of the Galaxy stuff. This review was actually supposed to be posted last Monday, but it wasn’t. I’m not sure if it had to do with being rather sick last weekend or if I had just had too many “meh” reviews in a row, but when it came time to write this, I just couldn’t. The words wouldn’t come to me. So, I did the ML stuff, which has brightened my spirits a bit, and now I’m back to Nebula. Let’s take a look at how she turned out. 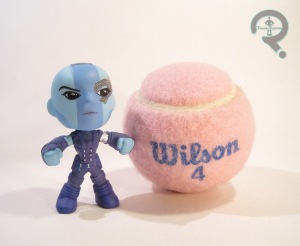 Nebula’s part of the first assortment of Guardians of the Galaxy Vinyl Figures. Unlike Star-Lord, Nebula is the only version of the character available in the line (also one of only three Nebula figures available total, like in all of the GotG product). Nebula is a little under 3 inches tall and has no articulation, unless you want to count the bobble head. Nebula’s sculpt is wholly unique to her, and while it is well done from a technical stand-point, there are some questionable choices. Namely, what the heck is up with her pose? She’s standing kind of straight, with her legs wide, and she’s leaning forward just a bit, with her head tilted back ever so slightly. And then there’re the arms, which are outstretched, but almost in a halfhearted sort of way, like she’s been holding them up for a minute and now they’re starting to get tired. What was Funko going for here? Is this meant to replicate a specific pose from the movie? Because I don’t recall Nebula replicating this pose at any point, and if she did it must have only been for the briefest of moments. There seems to be some inconsistency on how the mechanics on her head should be done as well. The bit at the top of her scalp is sculpted, which the stuff around her eye is just painted, so they don’t match. Those things aside, she does have some nice detail work on her costume and such, which is cool, I guess. While the paint on Star-Lord was beyond the Funko norm, Nebula is about par. There’s some nice work on the face, but the paint on the body is fuzzy around the edges and there’s a fair bit of bleed over. Also, the colors are all very similar, which makes the figure a little dull looking. I know she had a limited palette in the movie, but other merchandise has made it work.

Nebula is from the same mall trip (with Super Awesome Girlfriend!) that got me Star-Lord and my SciFi Vinyl Figures. Nebula was the other half of the two GotG blind-boxed figures I picked up. I was initially rather excited to get her, what with Nebula being a favorite of mine from the movie, but I think some of the excitement has worn off. She’s really not as good as she could have been, and it’s sad that this was Nebula’s only figure at the time of the movie’s release. With all that in mind, the figure’s not the worst thing ever. I honestly can’t say why I put this review off for so long. It was actually rather painless.