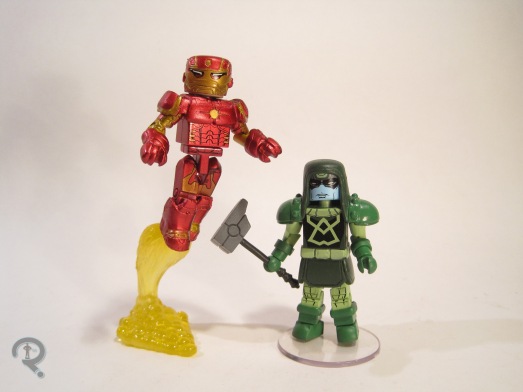 You know what I’ve missed reviewing? Marvel Minimates. Sure, I’ve reviewed a fair amount of figures from other Minimate lines, and a fair number of other Marvel figures as well, but it’s just not the same! As luck would have it, the latest set of TRU exclusive Marvel Minimates just started hitting stores, so new Marvel Minimates to review! First up, it’s two space-faring ‘mates, Space Armor Iron Man & Ronan the Accuser!

These two comprise one of the four two-packs that make up the 19th Toys R Us exclusive series of Marvel Minimates. These two figures in particular were originally designed for the TRU exclusive Infinity tie-in set, but they weren’t amongst the four chosen for the actual set. It’s nice to see them turn up here.

Like Captain America before him, Iron Man has had quite a few Minimates in the past, but he had yet to join the ranks of the space worthy heroes. Now he’s an official member of the club, with a card and everything. Okay, there’s no card. Or club. It’s more of an “in my mind” sort of thing. Anyway, Iron Man was the other “heavy hitter” from the Infinity poll, so it’s no surprise to see that DST found a spot for him. The figure is roughly 2 ½ inches in height and he has 12 points of articulation. Tony’s had a few space armors over the years, but this ‘mate is based on the most recent one, which has made prominent appearances in the recent Guardians of the Galaxy comics, as well as being Tony’s main look in Infinity. Iron Man is built on the standard Minimate body, with non-standard pieces for the upper arms, hands, and feet, as well as add-ons for the helmet and torso armor. The figure features a fair bit of re-use from previous Iron Men. The upper arms come from the Series 35 Mark V, the hands are from Series 49’s Mark 42, and the feet are from Series 45’s Mark VII. The helmet and chest piece are both new to this figure, and both seem to be pretty great adaptations of the comic design. The re-use pieces are also pretty decent matches to the source material, which is always cool. It’s really awesome to see DST put their tremendous bank of prior IM pieces to good use. Iron Man’s paint is overall pretty good. The base colors are a little sloppy in some places, and it would be nice if the red and gold were just a little bit more distinguished. The biggest issue is one that isn’t apparent when the figure is all armored up. The underlying Stark face is set rather high on the head, resulting in a rather chubby looking Tony, and worst off all, the red paint from the helmet has bled onto the face, resulting in permanent red marks. Fortunately, these issues are hidden by the helmet, and the rest of the figure’s paint, particularly the detail work, looks nice and sharp. Iron Man includes a spare hair piece (re-used from the Series 51 Nova), a blast off base cast in yellow, and a clear display stand.

Now we get to the real star of the set, Ronan the Accuser! This marks Ronan’s second venture into the world of Minimates, but it’s the first comic version of the character. As cool as the movie version was, it’s hard to beat the classic Ronan design. Ronan stands about 2 ½ inches tall, and has 14 points of articulation, although his head is a bit restricted by the hood. Ronan is based on his original comics design, which is the one he’s pretty much stuck with since his creation. It’s a solid piece of design work, and really holds that classic Marvel feel. The figure is built on the standard Minimate body, with add-ons for the hood/shoulder pads, belt/skirt, and glove and boot cuffs. The glove and boot cuffs are re-used from numerous classic Iron Man ‘mates. They’re pretty straightforward pieces, and they are pretty much perfect for Ronan’s look. The hood/shoulder pads and the belt/skirt are both new to this figure. Both pieces are very nicely sculpted and are pretty much spot-on for the character. The impediment of the neck movement by the hood is a little annoying, but I’m not sure how else it could be handled. Ronan features some pretty great paint work. The various greens are all very nicely chosen and all pop in their own way. The detail lines are fantastically handled, and the face in particular is perfect for Ronan. Ronan includes his signature hammer (and the head is right side up this time) and a clear display stand.

I acquired these two from my local TRU, with the assistance of fellow Minimate Multiverse member Ms. Marvel Fan, who was super helpful in making sure I got a set. I’ve been anxiously awaiting this set’s release ever since I picked up the Infinity set, so I’m really happy to finally have them. Iron Man is a little “meh” but he’s not terrible. Ronan, on the other hand, is easily one of my favorite ‘mates in quite some time. He’s just so well done!