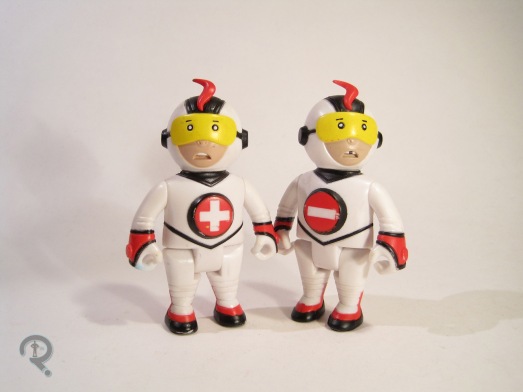 There’s sort of a tradition amongst the successful animated adaptations of comic properties of having a unique character, not from the comics. X-Men: The Animated Series had Morph, Superman: The Animated Series had Livewire, and Batman: The Animated Series actually had two pretty big ones with Renee Montoya and Harley Quinn. Teen Titans continued the tradition, not only with a number of villains unique to the show, but also with Titans East members Mas y Menos, a pair of Spanish-speaking twins who possessed super speed so long as they were touching. Now, there were a few things of note about the two of them. First of all, they never got any focus episode or anything, in contrast to the other members of Titans East. They just showed up with the fully formed team, with no real explanation. Second, they actually preceded the appearance of usual Titans speedster Kid Flash by over a season, which was certainly interesting. Anyway, they ended up with figures in Bandai’s Teen Titans Go! line, which I’ll be looking at today. 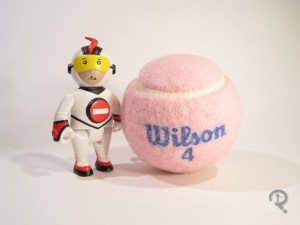 Mas and Menos were part of the 4th series of Bandai’s Teen Titans Go! line. They actually weren’t packed together; Mas came with Aqualad and Menos was packed with Wildebeast (reviewed here). Now, usually I try to review figures as they were released, but a) my Teen Titans Go! collection is scattered all over the place, and b) Mas y Menos are almost exactly the same figure, making two separate reviews seem a bit silly. Alright, so the figures are about 3 inches tall and they each have 5 points of articulation. So, remember how I give Bandai a hard time about the atrocious scale of this line pretty much every time I review it? Yeah, Mas y Menos are some of the worst offenders. In the show, they were supposed to be rather small. At 3 inches, they’re at most a half an inch shorter than the rest of the line, which isn’t really that much of a difference. And, they more or less keep the proportions from the show, making the figures look like they come from a different line entirely. When placed next to figures like Cyborg (or packed with Wildebeast) who are already too small, the result is really laughable. Okay, so the hilariously bad scale’s been addressed, but how is the sculpt looking past that? Well, from the front, it’s not bad. The internal proportions are pretty decent, and they do actually look a fair bit like the characters on the show. There are a few etched details, all of which are straight and clean. “Wait, Ethan,” you say, “Why do you specify ‘from the front’?” Well, hypothetical reader, that’s because viewing these figures from the side reveals that they’re like half the thickness they should be. It looks as if the poor twins got run over with a steamroller or something. Those poor kids! We’ve covered the scale, we’ve covered the sculpt, surely the paint can’t be that bad! Well, to be fair it isn’t. Or it wasn’t. It was well applied, it was fairly clean, and the colors were pretty well chosen. Why the past tense? Because, as I’m steadily learning, Bandai paint is the closest we’ll ever come to a physical manifestation of the past tense. Mas y Menos once had good paint, but it’s just sort of flaked off over time, not through rigorous play or poor storage, but just through exposure to that pesky air we seem to have so much of these days.

Like so many of the Teen Titans Go! line, I was actually quite excited to get these figures. Titans East in particular were my favorite set of characters from the show, and these two were a key piece of that. Why wouldn’t I be excited for these figures? I think these two may have been what shattered the illusion of the line for me. After picking them and the rest of Series 4 up, I just kind of had this disinterest in getting the rest of the line. I wish I could say these figures hold some sort of redeeming quality, but literally the only thing in their favor is that they’re the only figures of these two ever made. And that’s disappointing. Thanks Bandai…. 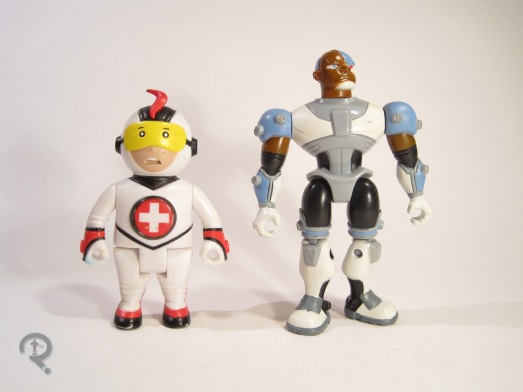