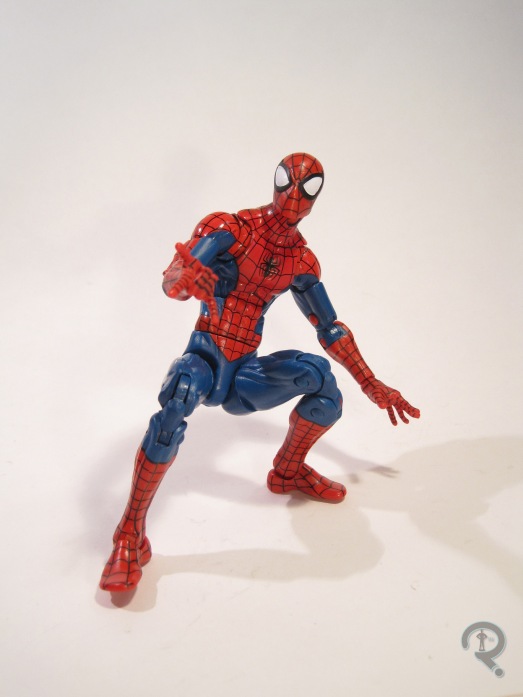 Alright, now that we’ve finished looking at a whole series of Marvel Legends, why don’t we move onto—Wait, what’s that? There are more Marvel Legends? A whole ‘nother series? Oh, wow. Well, buckle up guys, looks like I’ve got some Legends to review! It’s okay, though, because this time they’re Spider-Man Marvel Legends! That’s very different! Let’s kick things off with the main man himself, the Amazing, Spectacular, Sensational, Peter Parker (that’s sort of an adjective) Spider-Man! 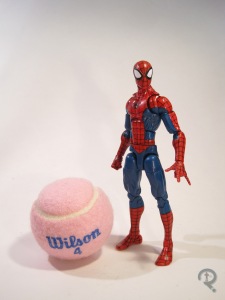 Spider-Man here is part of the second series of the Amazing Spider-Man Marvel Legends Infinite Series. Or the third, depending on whether you count Boomerang, Spider-Girl, and Toxin as their own series or just an off-shoot of the first. I’m going with the latter cuz it’s easier. The first series of the line had the Superior Spider-Man and a Spidey based on the Amazing Spider-Man 2 movie design, but not just a straight forward, classic Spider-Man. This figure fixes that. The figure is roughly 6 inches tall, with 32 points of articulation. Spidey makes use of the body built for the Superior Spider-Man figure. It’s not a perfect body, but it offers a nice, svelte body type, and it’s a lot less clunky than the Bullseye body. Plus, the range of motion on all of the joints is exceptional, allowing for tons of extreme poses, which are definitely key to the character. The shoulder and ankle joints in particular are fantastic. At first glance, I thought the head was a re-use as well, but it’s not. The basic shape is the same, but the eyes are a bit bigger, befitting the more playful nature of this incarnation of the character. Spidey has his choice of 3 different sets of hands: web-shooting, wall-crawling, and fists. I think these are all new to this figure, but I’m not 100% sure. I know none of them were shared with Superior. Regardless, they’re all very nicely sculpted, and add a whole lot of expressiveness to the character. Okay, here’s the part where we all take a deep breath in anticipation, because it’s time to talk about the paint. Are you ready? Okay, good, because the paintwork on this figure is actually really well-done. Did I freak you out there? Sorry! So, it’s not all perfect. There are a few misplaced lines here and there, and there is the rather annoying issue of the red elbow pegs showing through on the blue side

of the arms. Aside from that, it’s surprisingly well done. The red and blue are perfectly chosen, and applied nice and clean. The web lines are sharp and mostly stick to right where they should be. There aren’t any issues with bunching up or just randomly stopping like we saw on Superior. And that’s a very, very good thing. I think this figure has effectively convinced me that I much prefer the painted lines to the sculpted ones. They just look so good here. I already covered the assortment of hands, but Spidey also includes an extra head with the mask pulled up, a slice of pizza, and the requisite B-A-F part, Hobgoblin’s right leg. The extra head is cool, though it might have been nice to get a whole Peter Parker head. The pizza is far and away my favorite piece of the figure, just for the off the wall nature of it. It’s just such a cool idea!

So, remember how I got the whole Thanos series (except for Batroc) from Big Bad Toy Store? Yeah, I got this whole series at the same time. Yay for getting 14 Marvel Legends at the same time! I was vaguely interested in Spider-Man, because he did look cool, but I mostly bought him for the Hobgoblin piece. I mean, he’s just another Spider-Man, right? Wrong. He’s is the Spider-Man. Not since my very first Spider-Man (the super-posable 5 inch one from the 90s line, if you’re curious) have I enjoyed a Spider-Man figure this much. This figure is easily the best interpretation of the character I own. There are a few nits here and there, but this is a truly great figure. Good job Hasbro!