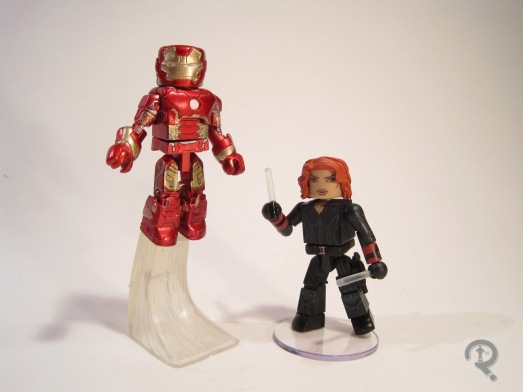 Alright, it’s the Age of Ultron Minimates extravaganza part 2 (Electric Boogaloo)! I kicked things off with two of the film’s new characters, Quicksilver and Scarlet Witch, but now I’ll be turning back to the “old faithful” characters that we’ve seen a few times before. Iron Man is the “oldest” MCU character, and Black Widow isn’t far behind him. And look at that, they’re even packed together. How convenient. 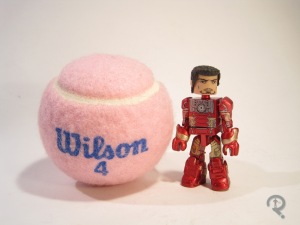 It would be weird to have an assortment of Avengers merch without an Iron Man, so here he is. The figure is about 2 ½ inches tall and he has 12(ish) points of articulation. As noted in the name of the figure, this is Iron Man in his Mark 43 armor, which he ends up wearing for the first half or so of the film. It’s worth noting that this makes him not actually fit with the rest of the team’s final battle looks, though it does mean you can display them from the opening battle. Structurally, this figure is the same as the Series 49 Mark 42, which is rather sensible, given that the 43 was just a recolored 42 in the movie. The add-on pieces for the 42 are serviceable, and they do a decent job of replicating the movie’s armor, but they have a few issues. Chief among them is that the upper arms are sculpted in such a way that the shoulders are effectively nothing more than cut joints. That’s really limiting to the figure. In addition, the figure feels a little too built up in general. The 42/43 are meant to be rather sleek, but the ‘mates are rather chunky. All that aside, the pieces do feature some nice detail work and some nice, sharp lines. The paint on Iron Man is pretty decent, actually. In particular, the shades of red and gold that have been chosen are nice and vibrant and have a really great finish to them. The line work is all pretty decent, although it’s perhaps a touch faint. As has become the norm on Iron Men, there’s full detailing under the helmet and torso. The torso offers a cool look at the inner workings of the armor, and the head offers a look at Tony’s face. The Tony face isn’t as good as some of the previous ones; they seem to have missed the mark on the RDJ likeness. The Mark 43 includes a spare hairpiece, a rocket blast piece, and a clear display stand.

In the comics, Black Widow is a marginal member of the Avengers at best, but the movies have changed that. There, she’s upgraded herself to one of the most central members of the team. And that’s pretty cool. Her presence in Marvel Minimates is rather reflective of this change. Of the seven Minimates of the character, five of them are movie-inspired. Anyway, onto the actual figure. Widow is roughly 2 ½ inches in height and she’s got 14 points of articulation. She is, of course, based on Widow’s main appearance in the movie. Structurally, she’s similar to the Winter Soldier version of Widow from Series 55. She shares the same belt and one of the holsters, but loses the Widow’s stingers. Also, the hair has been replaced with that of Battlestar Galactica’s Pegasus Six, which is actually quite a good match for her hair from the movie. This Widow ends up being a bit sleeker than previous versions of the character, which is a plus in my book. Widow’s paintwork is certainly passable. There is a bit of slop around the edges of her arm bands, but other than that pretty much everything is clean. One thing I noticed is that the detail lines seem a little duller here than usual. Things such as the “tron lines” kind of fade into the rest of the costume, and the details on the face seem a little light. Speaking of the face, it presents a good likeness of Scarlett Johannssen, but the somewhat vacant expression is a little disappointing in light the Winter Soldier Widow’s more intense look. Widow includes two eskira sticks, a handgun and a clear display stand.

After the craziness that was acquiring Quicksilver and Scarlet Witch, getting this set was actually rather simple: I just picked them up from my local comicbook store. I can’t say that this is a set that thrills me. The Mark 42 was not my favorite Iron Man Minimate, and the 43 still has several of the same issues, plus the step down in likeness. Widow fairs a bit better, and I do like a lot about this figure. I think that swapping the heads on this one and the Winter Soldier version might provide me with my preferred version of the character.