Alright, now we get into the good stuff. I mean, sure, Quicksilver and Scarlet Witch were fun , and Iron Man, Widow, Thor, and Cap weren’t bad, but the movie was called Age of ULTRON. Dude’s in the title. That makes him a little important. Add in Hawkeye who got short changed by the first Avengers movie, both in Minimate form and in the film itself, and you’ve got what makes for quite a winning combination. So, let’s look at the basic Hawkeye and Ultron Prime.

Hawkeye’s the requisite Avenger here, though I guess he’s the least “heavy-hitter” of the main six. The figure is about 2 ½ inches tall and he has the usual 14 points of articulation. This figure is based on Hawkeye’s no-sleeve appearance, which is pretty much the same as his main appearance in the first Avengers film. The figure shares his collar and quiver with the Hawkeye from the last movie, but this time around he’s got the Series 27 Ultimate Cap hair, which had been popping up with increasing frequency. It’s actually a better fit for Jeremy Renner’s hair than the previous piece, and a better sculpt in general. At first glance, Hawkeye’s paint isn’t much different than the last Avengers film version. However, a closer look shows that his paint is actually a fair bit more detailed, cleaner, and better aligned to the body. Hawkeye’s face is probably the biggest departure from the last one. I’m not sure that they’ve necessarily captured the Renner likeness any better, but I personally like this face a little more than the last. To be fair, the hair also plays a large part in how the face looks. Hawkeye is armed with his bow and three arrows, and he’s also packed with a clear display stand. 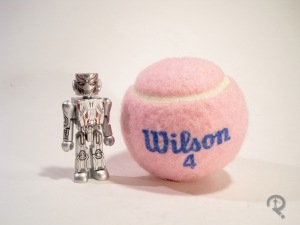 And now we finally get to the titular villain, Ultron. It’s taken a little time, but here we are. The figure has 14 points of articulation and stands about 2 ½ inches tall. That last bit is sort of an issue. Like the Hasbro figure before him, this Ultron Prime is simply too small. Now, it’s not unheard of for a Minimate to be slightly out of scale (just ask the Sentinels) but for a character like Ultron, who only needs to be a little bigger than the rest of the line, Diamond usually uses a few add-ons to bulk the character up just a tad. Characters like Groot have received a few pieces here and there to bring them to a more proper height. Ultron’s only additional sculpted piece is his head. Aside from that, he just uses the basic body. This makes him feel rather… unintimidating, especially when supposedly compact designs like the Mark 43 are so much bulkier than he is. The figure really would have benefited from at the very least a waist extender and a bulker torso piece. As is, he feels far too puny for the film’s version of the character. Now, moving past the issues with scale and sculpt, it should be noted that the paintwork on this particular figure is tremendously handled. All of his detail lines are nice and crisp, and his many textural details extend around almost the entirety of the figure. At the very least, on his own, he looks like Ultron. Ultron Prime’s only accessory is a clear display stand.

While I got the last two sets from my local comicbook store, they sadly had already sold out of both of the Hawkeye and Ultron sets by the time I got there. To make matters worse, my other go-to retailer for Minimates purchases, Luke’s Toy Store, ended up not getting adequate supplies of Series 61 due to a mix-up with Diamond. So, I ended up having to order a complete set of Series 61 (extras of Iron Man, Black Widow, Cap, and Thor included) from Big Bad Toy Store. I don’t dislike this set. I can’t say it wowed me as much as I’d hoped it would, though. Hawkeye is a great update on the original Avenegrs design. From top to bottom, he is a superior figure to his predecessor. Sadly, Ultron ends up being the disappointing piece here. He isn’t terrible, but he’s been horribly undercut by the lack of any sort of add-ons. His head piece is the first new part we’ve seen so far in this assortment, which leads me to believe that DST were trying to get as much as they could out of re-used parts. Perhaps Ultron’s additional pieces just didn’t cost out. Or it could even be possible that DST was unaware of Ultron’s final scale until it was too late to change. I don’t really know, but the end result is a somewhat lackluster take on the movie’s primary villain. That’s unfortunate.