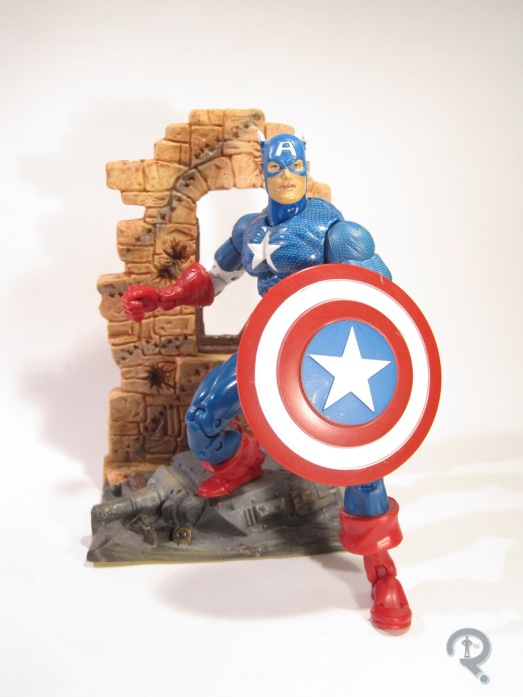 My relationship with ToyBiz’s run on Marvel Legends was and still remains a love-hate one. I enjoyed the figures (though that’s widely changed over time) but collecting the line was one of the most grueling, frustrating experiences of my collecting career. Even from the start, things were pretty rough, with two of the four first series figures being in higher demand than the others. One of those two was Captain America, who up until this point was running short on good figures. But I got one, and that’s what matters to me! 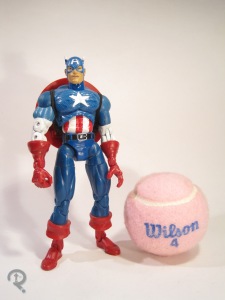 As noted in the intro, Captain America was released in the first series of Marvel Legends. The figure is 6 1/4 inches tall and features 36 points of articulation. The articulation is okay, but Cap is definitely hindered by being released before ToyBiz had perfected some of the joint styles. The neck and mid-torso movement are particularly limited, almost to the point of making you wonder why they even bothered. Cap’s sculpt was all new (in fact, I believe it remained completely unique to him) and it’s got some definite highs and lows. Let’s start with the highs. The head sculpt is quite good. In fact, it’s probably my favorite Captain America head sculpt to date. It has strong enough features, and has a determined expression while avoiding looking too angry. From the neck down, the sculpt takes a bit of a downturn. The proportions are a little wonky, and a lot of the muscles look strange and misshapen. Not terribly so, but definitely noticeably off. The hands are well sculpted, but they seem a little on the large side. The real issues with the sculpt are on the lower half, where the articulation becomes far more obvious, and we get things like the wonky duck feet he’s sporting. Still, as a whole the sculpt doesn’t seem too bad, and it’s certainly better than some of the other sculpts in the line, even the ones that came later. It just goes to show that a quality head sculpt can go a long way. The paintwork on Cap isn’t perfect, but it’s pretty decent. Slop and bleed over are both minimal, and the colors seem pretty good, if maybe a tad washed out. The patterning on the upper portion of the blue is pretty cool, though it’s a little jarring that it just stops on the under sides of the arms. Cap came packed with a display stand, sculpted to resemble the wreckage of a tank and a portion of brick wall, as well as a small plastic American flag, and a reprint of Captain America #100.

While I was able to find his series-mate Iron Man when the series was first released, I was not quite so lucky with the good Captain here. At least, not at first. However a year or so later, KB Toys marked all of their Marvel Legends down to $4. Most of their stock was made up of easy to find figures from later series of the line, but I was able to find one lone Captain America amongst them, which I happily bought. And he’s stuck with me since. The figure is far from perfect, and he shows his age, but I must admit, after digging him back out for the review, I enjoy him a lot more than I thought I would. I think this guy might just stay out of storage for the time being. 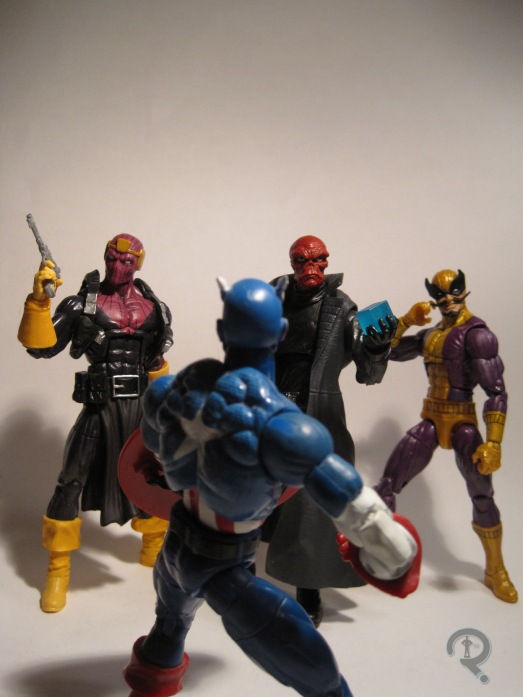