If there’s a theme to any of my recent reviews, I’d say it’s “figures that are almost identical to figures I reviewed not long ago.” First Superman Red, then Ultron 2.0, and now it’s the Dog Alien. Of course, most of these figures have a pretty good reason for being so similar to each other, and as an added bonus, the reviews are also a heck of a lot easier for me to write. Yay for Ethan being selfish and lazy!

The Dog Alien is the latest release in NECA’s subset of figures based on licensed video games. The idea behind the line is applying the more limited color palettes of vintage video games to some of NECA’s more realistic sculpts, affording them a chance to get an additional use out of some of their molds. The Dog Alien is over 9 inches tall (standing straight up) and features 39 points of articulation, plus a bendable tail. The figure is based on the appearance of the titular character in 1992’s Alien3 tie-in video game. Sculpturally, the figure is identical to the Aliens Series 3’s regular Dog Alien. Though it isn’t my favorite of the Xeno designs, there’s no denying that this is some of NECA’s finest Xeno work. Seeing as there are far less chances for re-use on the Dog Alien, I’m glad to see NECA found another use for this tremendous sculpt. Obviously, the real draw of this figure is the all-new paint scheme. The game which the figure is based on was a 2D side-scroller. Depending on which direction the alien was moving, it would be either blue or brown. The figure has replicated this idea quite expertly. When viewed from the right, the figure is blue, and when viewed from the left, he’s an orange-ish brown. The paint is handled in such a way that you can get a surprising amount of range without seeing the opposite side’s color. In addition, the paint is applied in such a way to really accent the strengths of the sculpt, and highlight many of the cool details that were easily missed on the regular version. The colors are bright and vibrant, and contrast quite nicely with the underlying black. The Dog Alien is packed with the same stand included with the standard version. I don’t find I need it, but it’s nice to have in case you want to do some more extreme posing.

When this figure was first announced, I really wasn’t sold on it. I’m already pretty iffy on the Dog Alien in general, so I wasn’t sure I wanted to have yet another one. But, up to this point, I’ve picked up every figure from NECA’s Aliens line, and it would suck to just skip one. So, I had quite the dilemma on my hands. A few weeks ago, I stopped by local toystore All Time Toys, just to look around, and they had happened to get their shipment of these guys in. In hand, my opinion of the figure changed completely. This figure really pops. It could have been really gimmicky, but the paint here is top notch, and produces an incredibly unique figure. This has gone from an item I thought I might skip to the highlight of my collection. 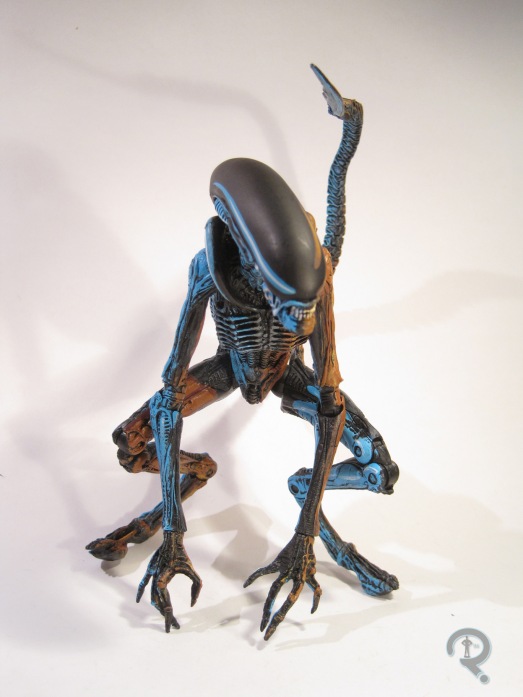