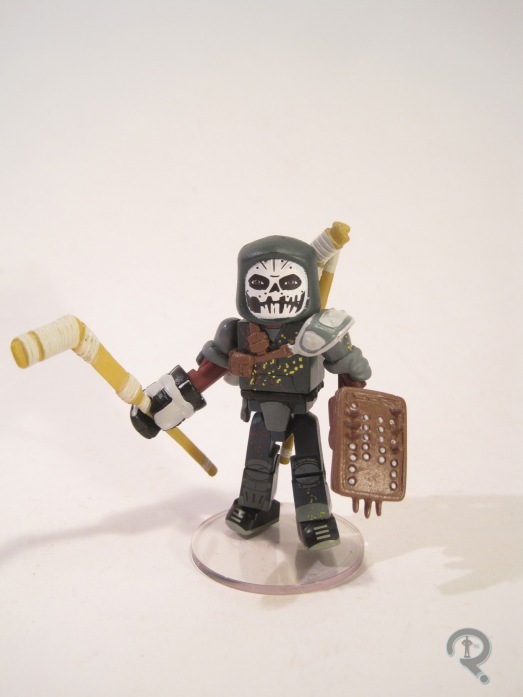 So, my love of almost all things Minimates and my moderate interest in Teenage Mutant Ninja Turtles insured that I found myself a full set of the line’s first series. After the first series, my interest kind of waned a bit. Not the fault of the line or anything, I just got distracted by other stuff. I did manage to track down one of the Series 2’s figures, Karai, which I liked well enough. One of the more glaring omissions from Series 1 was long-time Turtle ally Casey Jones, who found his way into the second set. 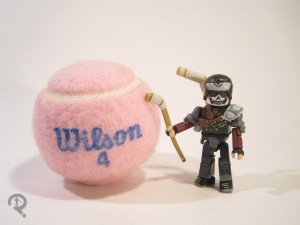 Casey Jones was released blind-bagged, as a part of the specialty assortment of Teenage Mutant Ninja Turtles Series 2. He’s also available packed with Michelangelo in the Toys R Us assortment, for those wanting to go the non-blind-bagged option. The figure stands about 2 ½ inches in height and has the usual 14 points of articulation. Like all the others in this line, he’s based on Casey’s appearance in the current cartoon. Casey features a fair number of sculpted add-ons for his mask/hood, straps/shoulder pad, elbow pads, belt, and his padded gloves. The elbow pads are re-used from the Ghostbusters Minimates line, but aside from that everything’s all-new to Casey. Everything is exquisitely sculpted, with tons of detail work, but not so much as to make him look out of place amongst the other Turtles Minimates. The padded gloves in particular look pretty amazing, with some great texture work on the stitching and padding. Paintwork is the downfall of most of the Turtles Minimates, but it seems to have turned out a fair bit better for good ol’ Casey here. For the most part, the base color work is pretty cleanly handled. There’s a little bit of bleed over here and there, but nothing too bad. There

are even a few areas with purposeful slop, which are very nicely handled and add a nice extra bit of character to the figure. The detail lines are all carefully placed, so as to capture the animated style in as few lines as possible. Under the mask, there’s a full Casey face, which is a little bit goofy looking for my taste, but captures the show look pretty well. Casey, like a lot of the Turtles Minimates, is no slouch in the accessories department, featuring an extra head, hairpiece, hands, a pulled down hood, two different hockey sticks, a baseball bat, and a clear display stand. The hair and hood allow for unmasked displays of the character, and the extra head gives us the skull-ish face paint he’s sported on the show. The various sports equipment is kinda key to the character, so it’s cool to see here, and well-sculpted to boot.

After playing the blind-bag game with Series 1 and then trying again with Series 2 and getting Karai, I decided to give up and just get an opened Casey from my favorite Minimates retailer, Luke’s Toy Store. Casey’s long been one of my favorite parts of the Turtles mythos, so I was happy to see him turn up in the Minimates line. The final figure is a little different from my preferred interpretation of the character, but he’s one of the better figures this line’s had to offer.