The X-Men were so popular in the 90s that they not only had two books of their own, but also a whopping three spin-off titles. Two of those, Excalibur and X-Factor, had been launched in the 80s, and the other, X-Force, was a rebranding of the New Mutants in order to make them more “extreme.” This included adding Cable, a dude who’s mutant power was apparently being a big dude with a gun, aka being the personification of 90s comics. Cable had a twin/clone, called Stryfe. Let’s look at some figures of those two today!

This pair was released in the second series of Toy Biz’s X-Men: Steel Mutants line, because apparently the X-Men just weren’t 90s enough.

Oh man, here’s Cable. Why’s he called Cable? God only knows. Maybe he used to work for Comcast. That would certainly explain his surly nature. The figure stands 2 ½ inches tall and he has 4 points of articulation. Cable had quite a few figures in the 5 inch X-Force line, and this one uses Series 2’s Rapid Rocket Firing Cable as sort of a reference point. I don’t know if it’s based on a specific look, but it does present a slightly more subdued look for the character than usual. He doesn’t even have shoulder pads! His sculpt is generally pretty well handled. He’s got a good amount of detail, and his build does set him apart from the other figures in the line. Plus, I do dig that assymetry. His pose is pretty straight forward, with no real outlandish poising or anything, and he’s decently balanced, so there are no issues with getting him to stand. Cable’s paint is pretty much on par with the rest of the Steel Mutants. There’s a fair degree of bleed over around the edges, but he doesn’t look atrocious. The colors are pretty well chosen, and he looks pretty sharp. 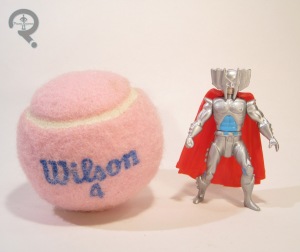 Yes, you read that name right. He’s named Stryfe. And it’s spelled with a “y.” Because 90s. Strule also stands roughly 2 ½ inches tall and has those same 4 points of articulation. Stryfe is presented here in full 90s glory. Check out that head gear. Seriously, that helmet looks like Liefeld deliberately set out to out-Wolverine Wolverine. I suppose they succeeded in that effort. Doesn’t make it look any less stupid, but more power to him. He appears to be inspired by the Stryfe figure in the 5-inch line, though he’s lost most of that figure’s interesting armor detailing, which has the unintended side effect of drawing more attention to just how goofy the main design of the character is. It doesn’t help matters that his sculpt is just markedly inferior to that of his pack mate. Cable is nicely sized, full of detail, and not in a super goofy pose. Stryfe is the opposite of those things. The size is particularly egregious, since he’s a clone of Cable, and should therefore be about the same size. That coupled with the long monkey arms, the strange lunging pose of the legs, and the ill-fitting cape makes for a really rough looking figure. The paint doesn’t really do him any favors either. He’s mostly a somewhat drab silver, which only further highlights the blandness of the sculpt. It is, at the very least, clean, which I suppose is a plus.

This pair was purchased for me from Yesterday’s Fun, alongside the previously reviewed Cyclops and Mr. Sinister set, courtesy of my Super Awesome Girlfriend. Unlike the other set, I never had either of these guys growing up. In fact, this set represents the first, and to date only, Stryfe figure in my collection. So, there’s that. Cable is a pretty solid figure, but Stryfe is easily one of the weakest figures this line had to offer, resulting in an oddly balanced set.