When I think Halo, my mind tends to immediately jump to the Spartans, who are the protagonists of <most> of the games in the series. The main character, Master Chief, is one of them, and the default settings for players in multiplayer games always have the player as a Spartan. They tend to get pushed to the forefront. With the exception of the three ODST reviews, all of my Halo reviews so far have looked at the Spartans. But, what good are a bunch of armored heroes without a foe to face off against? My personal favorites of those foes are the Covenant Elite, who make for the best direct parallel to the Spartans. So, let’s have a look at one of them, shall we?

This particular Combat Elite was released as part of a Team Slayer two-pack in McFarlane Toys’ Halo 3 line. He was originally packed with a Blue Mk VI Spartan. The figure stands about 5 inches tall and has 25 points of articulation. In the games, the Elite are noticeably larger than the already massive Spartans, but that’s not quite the case with this particular figure, at least when compared to the Spartans I have from Reach, 4, and 5. To be fair to McFarlane, the scale is noticeably smaller on the Spartans from 3, so this figure would probably look a lot more menacing with them. As is, he’s not terrible, truth be told; he’s about the same height as the average newer Spartan, and he’s a bit bulkier, so it works. Just don’t put him next to, say, Jorge. He looks even better with the ODSTs! As far as sculpt goes, he’s got the same basic sculpt as all the Halo 3 Combat Elites. It’s perhaps not as fantastic as some of the more recent stuff, but it’s still no slouch. The armored parts are very clean, sharp, and mechanically detailed, and the underlying areas are covered with tons of fantastic texturing. I’d say he looks like he stepped right out of the game, but I think he might even be better than the game in terms of detail. I will say the wrists look really skinny, especially in comparison to the rest of him, but that’s my only real complaint. Paint is kind of important on a lot of these figures, since it’s the one thing that sets them apart. This Elite’s color scheme is a nice red/purple combo, which looks really sharp. And it’s not just solid red, solid purple either. No, there’s a lot of great variation in the color coded areas, which adds a nice level of depth to the figure. Plus, he’s got some great wash work to help accentuate the sculpt, which does its job well. I also love the glossy finish on the armored parts; it gives him some nice pop. The Elite’s one accessory is a standard plasma rifle, which is admirably sculpted, and sits well in his hands.

The Combat Elite was the last piece of my Halo buying spree from this past summer. I actually got him at the same time as the recently reviewed Rookie figure. After getting that many Spartans and ODSTs, I figured I needed at least one of the Elite. So, I was looking at the various options, and this guy caught my eye. I like the color scheme, because it makes him look kinda like Magneto, so that’s kind of become his name, for me at least. I’m glad I picked this guy up, because he’s a lot of fun! 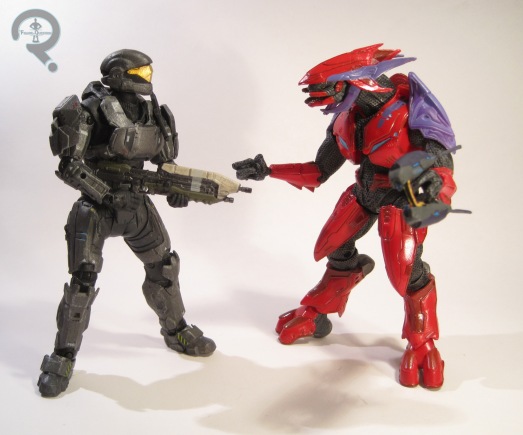