Jack Kirby is a pretty pivotal figure in comics, having had a hand in the creation of a huge portion of the Marvel Universe. He didn’t just work at Marvel; he also spent a fair bit of time working for Marvel’s main competition, DC. He didn’t have the same impact at DC that he did at Marvel, but he did create the Fourth World, which picked up a pretty substantial cult following. One of my personal favorite characters from the Fourth World has always been Scott Free, aka Mister Miracle. Scott (or Scot, as he’s known now. Extra “t”s are so last century) has made a fairly recent return to the DC Universe, and his new look just got a figure, courtesy of DC Collectibles’ newest line, DC Icons.

Mister Miracle is figure 04 in the first series of DC Icons. He’s the lone New 52-based figure in the first series, which is fair, I suppose. The main purpose of the Icons line was to serve as a competitor for Hasbro’s Marvel Legends, so articulation is a key point. Mister Miracle delivers pretty well on this, sporting 27 points of articulation. Like a couple of the animated figures, he would really benefit from some sort of lateral movement on his legs, but you can still get a pretty decent range out of him. What he doesn’t deliver on so much is height. He stands about 5 ¾ inches tall, which makes him a good half an inch shorter than the average Marvel Legend and almost a full inch shorter than prior DCC figures. For what it’s worth, he’s in roughly the same scale as S.H. FiguArts figures. But he, and the rest of the line, are still a lot smaller than expected. Moving past that, he has a totally unique sculpt, which is pretty well executed. The proportions of the body are actually pretty good, and most of the articulation is worked in pretty well. Design-wise, he’s based on Miracle’s look from Earth 2, which is a slight tweaking of his original Kirby design. I think the original is still a stronger look, but this isn’t a bad look. The costume details are mostly etched in, which has

the result of making him look a lot sharper. The cape is a separate, but permanently attached piece, made from a softer materials. The sculpt is okay, but, the cape is a little oddly shaped. That being said, it works for what it is. The paint work on the figure is nicely handled overall. The etched in lines of the costume make for cleaner paintwork, and help to make the details pop a bit more. The colors are all done in a really cool metallic sheen, which really makes him look pretty sweet. For accessories, Mister Miracle includes two sets of hands (fists and open), a pair of hoverdiscs for his feet, and what I believe is a Mother Box.

I picked up Mister Miracle from my local comic book store, Cosmic Comix. He was actually the only of the four first series figures left. I was somewhat intrigued by the concept of Icons, and I’ve always liked Mister Miracle, so I thought this guy would be a good starting point. The issues of scale are a little frustrating, especially for people who were hoping to place these figures with their prior DCC figures. That being said, Miracle is a really fun figure, and he shows a great improvement in terms of quality for a DCC product. Plus, as more of these figures are released, the scale thing will become less of an issue. 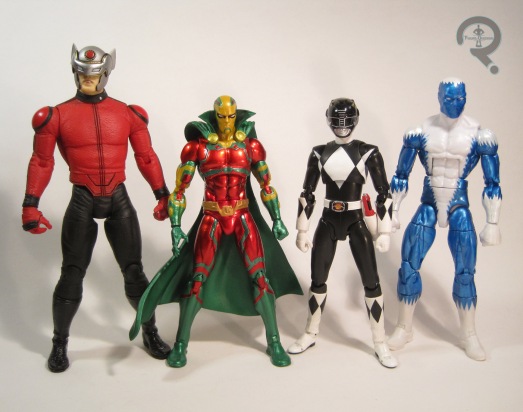