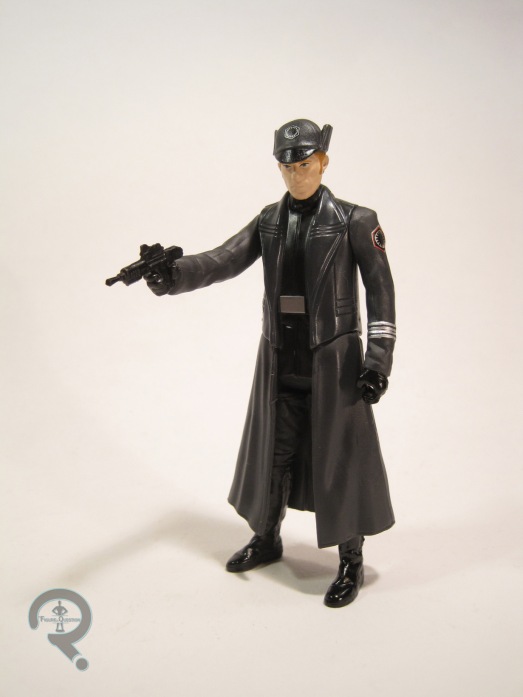 Man, that new Star Wars movie sure was a good movie. Like, really good. To be fair, large elements of the film’s plot and certain characters were somewhat recycled from the original trilogy, but I really didn’t care.  What I do care about are the toys! And hey, now I get to actually write a Force Awakens review with actual, real knowledge of the characters! What a novel concept!

I noted in my full review of the movie that Domhnall Gleeson, who portrays General Hux, was the only new addition to the cast with whom I was already familiar. I was actually kind of pumped that he was in the film, and I really enjoyed his performance and the character of Hux in general. He makes for a good bad guy. But, does he make for a good action figure? Let’s find out!

General Hux is part of Hasbro’s smaller scale Star Wars: The Force Awakens line of figures. He comes from the “Space” subset of the line, which makes sense (well, more sense than some of the other subsets). The figure stands 3 ¾ inches tall and he has 5 points of articulation. Standard stuff for the line. Hux’s sculpt appears to be unique to him. He’s presented in his fully dressed up uniform, with his hat and overcoat. He’s only seen a few times with the full get-up, but it’s striking, so I can understand why Hasbro went for it. I suppose that in theory we might see this sculpt reused for some of the other First Order officers, at least if the line runs that far. The overall look of Hux’s sculpt is decent enough, but I have one major issue with it. For other jacketed characters, such as Finn and Poe, there is a basic body with the underlying shirt and then an overlay piece for the coat. For Hux, however, the coat is just sculpted strait onto the body. It’s not really an issue on the torso, but it looks rather ridiculous when it has to break for the leg articulation. An add-on piece would have been much preferred here, and I really don’t know why Hasbro opted not to go for it, apart from a desire to cut costs. In addition, the bulk of this figure’s sculpt is a lot more simplistic than the other figures in the line. The coat and uniform are mostly devoid of any sort of texturing or any real small detail work, which only makes the cuts for the joints even more jarring. At the very least, the figure’s face looks like Gleeson, which is perhaps the one truly nice piece of the sculpt. Adding to the rather simple sculpt, Hux’s paint isn’t the most exciting thing. I guess it’s nice that the shirt and coat are different shades. And, the basic application isn’t bad. He’s just a bit drab. For accessories, Hux includes a small pistol, as well as a piece to yet another build-a-thing. I actually kind of like this build-a-thing piece, though, because it can work like a jetpack, which makes Hux a small bit more interesting.

I picked up Hux from my local Target. I was actually out with my brother picking up the new Battlefront game, and happened to find this guy. I had been somewhat excited to get him, and I was happy to find him, but the figure’s definitely not one of the stronger entries in this line. I mean, he’s not terrible, but he’s not super fun either. The character is also getting a Black Series figure, so perhaps that one will be better.