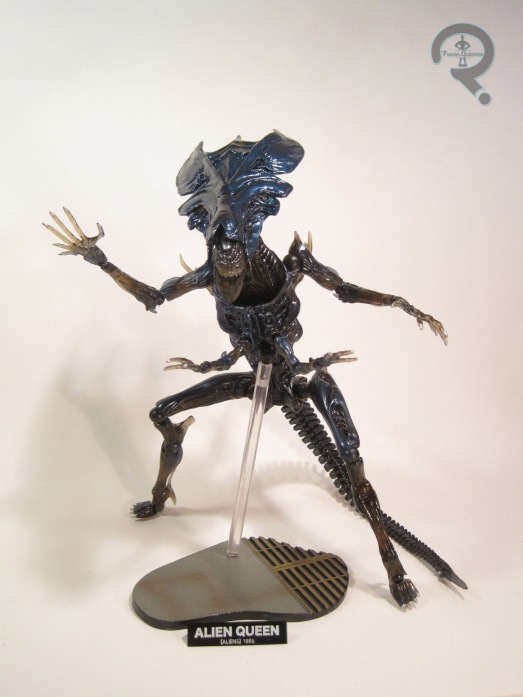 Alright, let’s get this party started! Christmas reviews officially kick off today! And it’s hardly a proper Christmas without some Aliens. It is, after all, the greatest film of all time (and required Christmas viewing in The FiQ household. No joke). As a fan of Aliens, I like to get as many of the figures as I can, and there have been more than a few different styles released over the years. Not too long ago, toy makers Revoltech had the license to the film. They released two figures from the movie, the second of which was the Alien Queen, which I’ll be reviewing today! 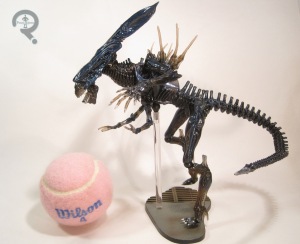 The Alien Queen was released as figure #018 in the Sci-Fi Revoltech line. She’s based on her appearance in the second movie, which is the correct appearance to base a figure on. The figure stands approximately 7 inches tall when fully extended and has 86 points of articulation, plus a bendable tail. The vast majority of these joints are Revoltech’s signature revolver-style joints, which are some of the best designed joints in the industry. There are a few non revolver joints, used on the wrists and ankles. The ankle joints are fine, and they hold up pretty well, but the wrists, particularly the ones on the larger arms, are quite fragile. In fact, both of the larger wrists on my figure broke and had to be repaired, more than once, resulting in loss of movement on those joints. That’s quite a bit of a bummer, and really knocks this figure down in playablity. Regardless of stability, the sculpt of this figure is pretty darn impressive. The design has been made a bit more stylized, to better fit the rest of Revoltech’s stuff, but it’s a pretty good translation of the film design. The sculpt does a pretty great job of working in the joints, for the most part, anyway. Some, such as the hips, are a little more obvious, but not terribly so. The level of detail and texturing on the individual parts is pretty awesome, and there’s even detailing on the underside of the head! As an added bonus, the figure’s construction makes her compatible with prior Revoltech figures, such as their Assemble Borg line, which adds a pretty fun bit of customizability. The paint on the Queen is actually pretty cool, at least in theory. She’s molded in smokey-clear plastic, with a dark blue, semi-translucent paint over it. It gives her this really cool, otherworldly look. The paint is also somewhat metallic, which adds a nice polish, and there’s some pretty cool lighter highlight work to it. So, why “in theory”? Well, I got this figure a little while after its release, and upon opening, I discovered that the figure was quite tacky, which doesn’t make the figure super fun to play with long term. The Queen is a pretty intensive figure in her own right, so she isn’t jam-packed with accessories. However, she does get a few things, including a display stand that looks like the floor of the Sulaco, a name plate, and a standard Revoltech box.

The Queen was given to me by my boy Tim, who’s well aware just how much I love Aliens, and fairly consistently quizzes me on just which versions of the creatures I own. After introducing me to Revoltech earlier this year and getting me hooked on their Assemble Borg line, he decided that the Revoltech Aliens were the next appropriate step. The Queen is not without her flaws, and she doesn’t quite stand up to the majesty that is the NECA version. That said, this figure did come first, so I can cut it some slack, and truth be told, she’s really not bad. As long as you’re careful, this can be a pretty awesome figure. Oh, and did I mention the fighting fists? 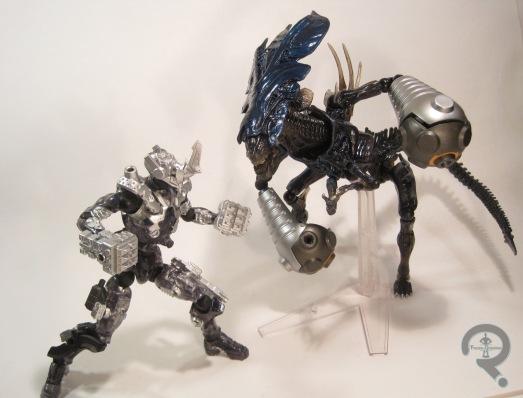