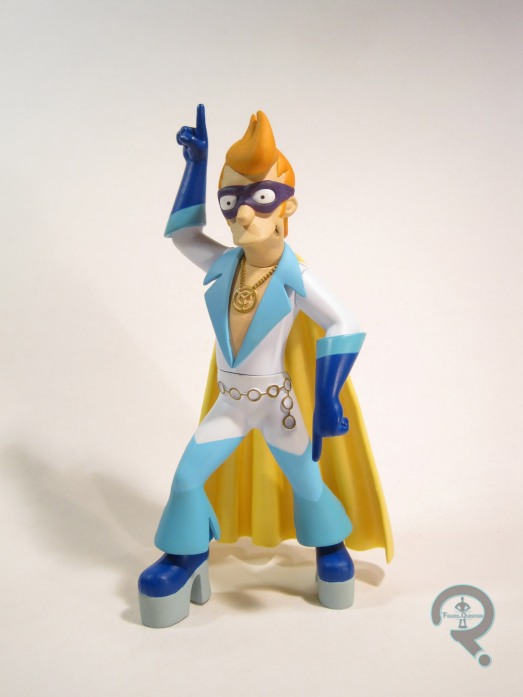 Futurama is a show that I tend to forget how much I enjoy until I’m actually watching it. While it’s framed as a dumb comedy, it’s actually pretty intelligent. It’s never been anywhere near as successful as its sister show, The Simpsons, but it’s done pretty decently for itself (seriously, the show’s been canceled how many times now?). Back when it first aired, Moore Action Collectibles picked up the license, hoping to replicate some of the success of Playmates’ World of Springfield line. Sadly, that didn’t work out for them. They only produced a single series of three figures, and that was all. Several years later, following Comedy Central ordering new episodes of the show, Toynami dusted of MAC’s old sculpts, and added a few of their own to launch a new line of figures. The line was actually fairly successful, with 9 series of figures. This allowed for Toynami to offer a few of the main characters with some variant looks, including today’s figure, Captain Yesterday, aka Phillip J Fry. 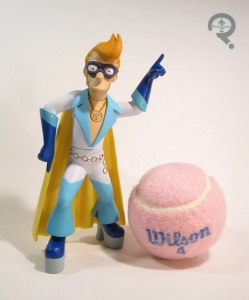 Captain Yesterday was released in Series 4 of Toynami’s Futurama line. Series 4 was the first series to include pieces of the line’s second Build-A-Figure, Robot Santa. Captain Yesterday is based on Fry’s appearance in the fourth season episode “Less Than Hero,” where he and Leela gain super powers and decide to fight crime as the New Justice Team. The figure is about 6 inches tall and has 4 points of articulation. While the MAC figures, and by extension some of Toynami’s figures, had a fair bit of articulation, the later figures only had the most basic movement, and were patterned after World of Springfield in that respect. Captain Yesterday was an all-new sculpt. He’s rather pre-posed, but he’s at least based on Captain Yesterday’s “role call” pose. If he could only have one pose, this is a pretty good one. The sculpt does an admirable job of translating Fry into three 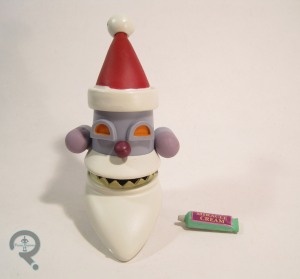 dimensions. It’s not a perfect translation, but it’s close enough that you’ll really only notice the issues when doing a direct comparison. The paint on this figure is pretty well done for the most part. There are some spots with some minor bleed over, but the basic application is very clean, and he looks really sharp. Captain Yesterday includes two accessories: a tube of Dr. Flimflam’s Miracle Cream (which is what gave Fry his powers), and the head of Robot Santa.

I was late to the party on this guy. I remember these figures being released, and I had even became a fan of the show by the time most of them hit stores, but for one reason or another, I never got any of these figures new. And, if I’m honest, I never had much motivation to track them down on the secondary market later. So, why do I have this guy? Well, I was in a Moviestop a few weeks ago, and discovered that Moviestop has apparently been bought out by Hastings, a collectibles store from the Midwest. This means they have a lot of action figures. Like, a LOT. Anyway, they had a bunch of Futurama figures, all priced below their original retail value. Since I always liked “Less Than Hero,” I figured Captain Yesterday was worth the purchase. This isn’t a revolutionary figure, or even a particularly stand out one, but he’s not bad, and certainly worth what I paid for him. Now, I just need to fight the urge to complete the New Justice Team…