The 2005 Fantastic Four movie is definitely far from a perfect film. Yesterday, I touched on the casting of Jessica Alba as the Invisible Woman, which is often cited as one of the film’s biggest negative factors. On the plus side, they didn’t botch all of the casting. Chris Evans as Johnny was quite good, as was Michael Chiklis’ take on Ben. Ioan Gruffudd’s Reed Richards doesn’t stand out quite as much as those two, and he was unfortunately hampered by a lack of chemistry with Alba’s Sue of Julian McMahon’s Von Doom. Still, Gruffudd turned in a decent, stand-up performance. As with the rest of the cast, he got a handful of action figures from the movie, one of which I’ll be looking at today. 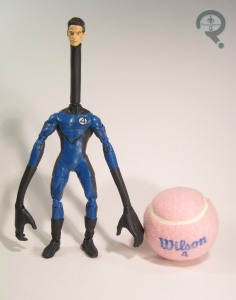 This particular Mr. Fantastic was included as a pack-in with the Fantasticar* that Toy Biz put out in the first Fantastic Four movie line. The figure stands just over 6 inches tall (without the neck extension), and he has 28 points of articulation. His articulation is a little weird, since it’s not in keeping with the rest of the figures in the line. That’s because this figure is actually a scaled down version of the 12-inch rotocast Mr. Fantastic. That figure’s hollow construction necessitated the “v” hips, and the lack of waist movement is due to the larger figure’s inclusion of an extending neck feature. At the smaller scale, the extending neck wasn’t feasible, but he still loses the articulation. Oh well. Aside from the slightly off articulation, the sculpt actually isn’t bad. I think the head has the best Ioan Gruffudd likeness of any of the Reed figures Toy Biz put out, and the body sculpt avoids a lot of the wonkier proportions that plagued a lot of the Fantastic Four movie figures. The longer forearms and larger than normal hands are a pretty cool way of showing off Mr. Fantasic’s powers, and I like the inclusion of all the smaller details on the gloves. Unfortunately, though the sculpt is a step-up from the other figures, the paint is a definite step down. Moving past the annoying scrapes of missing paint on my figure (which probably weren’t there when he was new), the paint is much more straightforward on this figure. There’s no accent work on any of the costume pieces, and there are several spots of noticeable slop, especially on the figure’s right thigh. On the plus side, the hair does exhibit some halfway decent work, so it’s not a total loss. Reed’s only real accessory was the extendable neck piece. It would have been nice to get a set of normal sized hands as well, but given that this figure was essentially an accessory himself, the lack of extra pieces isn’t unforgivable.

I picked up Reed at the same time as Sue, from a dealer at Balticon. I actually looked at the Fantasticar set a few times when it was on shelves but I never got one. In addition, I had the 12-inch version of this figure, which I liked quite a bit. The smaller version isn’t quite as impressive, but he’s still a pretty decent figure, and he might be my favorite version of the character that this line had to offer.

*The Fantasticar didn’t actually appear on-screen until the 2007 sequel. The one that this figure was included with was a Toy Biz-original creation, since the movie design had not yet been developed at the time of this toy’s release.