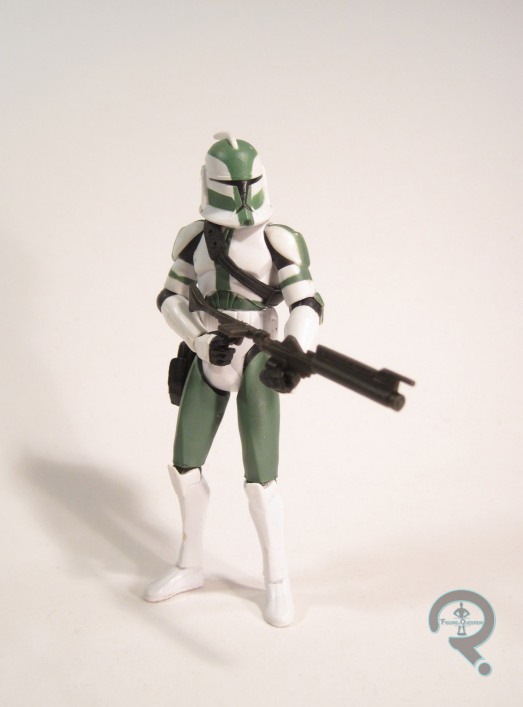 The Star Wars prequels are almost universally loathed. However, as bad as the movies as a whole may be, there are definitely some ideas and concepts present that were actually kind of cool, if under-explored. On the plus side, the animated Clone Wars show, was able to take a lot of those concepts and apply them to a narrative that didn’t totally suck. Possibly my favorite part of the prequels was the Clone army, who were actually given a ton of development and individualized treatment in Clone Wars. While many of the clones used in the show were new characters, the cartoon also took the chance to flesh out almost all of the named clones from Revenge of the Sith, including my personal favorite, Clone Commander Gree. 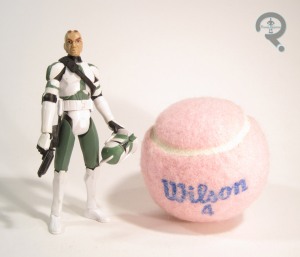 Commander Gree was released in the 2009 assortment of Hasbro’s Star Wars: The Clone Wars tie-in line. The figure stands about 3 ¾ inches tall and has 24 points of articulation. He represents Gree as he appears in the earlier part of the show, prior to the time skip. He’s seen here wearing his standard Phase I trooper armor, and as such, he uses the same basic parts as all the other basic clones in the line. The body isn’t a spot-on recreation of the cartoon design: the lower torso and the limbs are noticeably a little thicker, presumably to offer more stability. That said, it’s very close to what was seen in the show. Like most of the Clone commanders in the line, Gree features a removeable helmet. The helmet itself is nicely handled, and looks more or less the same as the second iteration of the non-removeable clone helmet. Under the helmet is Gree’s head, which is sporting his rather goody twin mohawked look. It’s a decent enough recreation of his look from the show, though it does look a little older than his on-screen counterpart. It’s also slightly on the small side, but that kind of comes with the removeable helmet territory. Gree gets a unique belt piece with a holster, as well as a bandolier add-on piece. These two pieces help to add a nice flair of uniqueness to him, which is certainly cool. Gree’s paintwork is handled pretty well. Early in the show’s run, the animation models were a bit less advanced. This affected Gree more than most, since his rather complex camo design was far too much to handle. So, his Clone Wars design is just the basic clone look, but with extensive green accents. The figure replicates this pretty well, and the overall application is nice and clean. Gree included a large blaster rifle, a blaster pistol, and a large missile missile launcher. Because Hasbro.

So, I don’t recall exactly where I got Gree. I’m pretty sure it was a Target. I know I got him while he was still a relatively new figure.  The Clone Wars line was definitely a fun one, and Gree is a pretty strong showing. 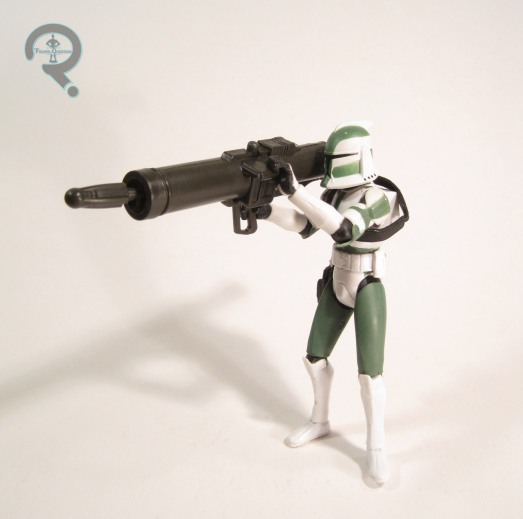