When the initial few waves of The Force Awakens product hit, the old guard of characters were largely absent, despite the large role of Han Solo in the film, and the decently-sized (and certainly incredibly important) role of Leia Organa. Around February of this year, Han found his way into both the 3 ¾ and 6 inch-scale lines, but Leia was still noticeably absent. Until now, that is! 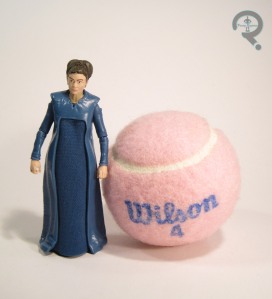 Princess Leia was released in the fourth series of the Force Awakens-themed 3 ¾ inch Star Wars: The Black Series, a line which remains exclusive to Walmart. So, first bone of contention with this figure: the name. In the movie, it’s kind of a point that Leia’s not really royalty any more, and she’s almost exclusively referred to as “General Organa.” It’s a small thing, but it’s an important change for her character. The fact that the box just lists her as “Princess Leia Organa” is kind of annoying (and doubly so, since there’s already another figure in this line with that *exact* name, which is just confusing everybody). Of course, the name’s pretty easy to move past, since I didn’t keep her in the package. What’s a little less easy to move past is the costume choice. Leia spends most of her screen time in a military uniform, which is not unlike her look from the Endor scenes in Jedi. She then spends about 5 minutes at the very end of the movie in a blue dress. We got the blue dress look, which I can’t say is my favorite. Alas, I don’t work for Hasbro, so I guess I’ll just deal. The figure stands about 3 ½ inches tall and has 22 points of articulation. She can get some decent motion out of her arms and neck, so that’s good. For what it’s worth, there’s a full body sculpt under her dress (she’s keeping it modest with a full-body stocking), articulated legs and all. The legs are rather limited, both by the obtrusive dress piece and by the decision to only give her cut joints at her hips.  Just as in the movie, her dress has a two-piece design, with the outer “jacket” being made from soft plastic and the under dress being real cloth. They mesh together pretty well, and it’s sort of a best of both worlds thing, preserving look and some of the movement as well. Issues with the design aside, I will admit that this is a pretty solid sculpt. The head captures Carrie Fisher pretty nicely, and I like the small texture details on the sculpted parts of the dress quite a bit. Leia actually doesn’t have much paint, with most of the dress being molded in the same blue. She gets some paint on her head, obviously. It’s not terrible, but it could certainly be better, especially the eyes. Leia includes no accessories, which is a bit of a bummer.

I’ve not had much luck with getting the Walmart-exclusive Black Series figures in my area, so I’ve yet to see any of these figures near me. However, Super Awesome Girlfriend is not cursed like me, and ended up just finding Leia by accident one day. Yay for me! I’ll be honest: this isn’t the Leia figure I was hoping for. Her other Force Awakens look is far more action figure-worthy, and would just make for an all-around better figure. With that said, this figure isn’t terrible, and I’ll definitely take this over no Leia at all. Here’s hoping the other version’s on the way.