Buffy the Vampire Slayer was a fairly popular show in the ‘90s. Though it hasn’t aged super well, it’s still the show that got Joss Whedon recognized, and it did a lot to shake up how TV shows were handled. It also moved a fair bit of merchandise, which included action figures. The earliest figures were by sculptor Claybourne Moore’s company, Moore Action Collectibles. MAC’s earliest figures were little more than glorified statues, and even when they started adding more articulation, the actual usefulness of said articulation wasn’t superb. When MAC went under, Diamond Select Toys took over the license. Their initial figures were somewhat similar to MAC’s in movement, but they eventually expanded their line to include a few better articulated figures, in order to compete with Toy Biz’s Marvel Legends. They kicked the line off with a few versions of the title character, Buffy Summers. 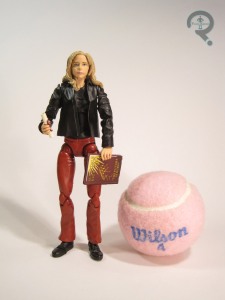 Buffy was released in the first series of Buffy the Vampire Slayer Deluxe Figures, which first hit in 2005. There were three Buffys offered in the series, based on her looks from various points in the show. This figure is based on her appearance in the first half of the Season 3 finale “Graduation Day.” It’s probably the most basic look we got for Buffy. The figure is just shy of 6 inches tall and has 31 points of articulation. With the exception of the shoulders, which were just cut joints (due to the design of the jacket), she was comparable with any Marvel Legends figure of the time, which wasn’t bad for a company that had, at that point, not attempted such an articulated figure. The sculpts of these figures were done by Gentle Giant Studios, who currently handle Star Wars: The Black Series and Funko’s Legacy Collection, so it’s no real shock that Buffy resembles the figures from those lines in terms of quality. The overall sculpt is actually quite good. While the head isn’t a perfect Sarah Michelle Gellar (nor is it the best likeness of her that DST would produce), it’s still got more than a passing resemblance. Perhaps my only real complaint would be the somewhat bland expression, which was a common problem with GG’s earlier figures. The body is a bit on the skinny side, but not horribly proportioned. The clothing all has nice detail work, and she certainly fits in with the rest of DST’s Buffy figures. Buffy’s paintwork is fairly basic, but it’s clean, and all of the colors match up pretty well with what’s seen on screen. Buffy included a spare set of bare arms, which allowed for the jacket to be removed, and even afforded the figure a bit of extra posability. She also had a pair of handcuffs, her diploma, and a Sunnydale High yearbook. Curiously absent is any sort of slaying equipment. They couldn’t even give her a stake?

Buffy ended up being one of the last BVS figures I got, despite being the only version of the main character I’ve ever owned. I ended up getting her on clearance from a KB Toys. She’s actually a pretty fun figure, even for just a basic person in basic clothes. It’s a shame that DST didn’t do more figures in this style from some of their other lines.