Oh, wow, three years already?  Wow, that one snuck up on me.  Yep, so The FiQ’s officially made it through one more year, and what a year it’s been.  I’d like to start things off by pointing out that this is the first set of 365 reviews I’ve done without missing a single day (in fact, it was a leap year, so I went 366…), which has been a pretty big deal for me.  Now, to just do that every year, for the rest of my life…

So, in my third year reviewing figures here at The FiQ, I wrote 250,177 words about 493 figures, 8 vehicles, 3 playsets, and one movie.  The amount of figures reviewed is down from last year, but total items reviewed is actually the same.  I’m actually down about 4,000 words from where I was last year.  Whether that’s good or bad is totally up to you.

This year brought my total views on the site up to 101,313, and I gained an additional 21 followers, which brings my total number up to 105!  In addition, there were 48 comments this year, excluding those made by yours truly.

Taking a look at the contents of my individual reviews, it would appear Minimates was unseated this year as the most prevalent subject of review.  The top subject was Star Wars, which was the focus of 47 reviews (covering 66 individual figures), with Minimates not far behind that with 44 reviews, and Marvel Legends just behind that at 43 reviews.  As of today, I’ve reviewed 41% of my total collection (which went up another 500 unique figures this year)

Looking at the contributions of others, this year also saw four guest reviews from four different reviewers (one whom was a new addition this year) and totaling 2,069 words.  Thanks guys!

As I did last year, I’d like to take a moment to acknowledge my top 5 reviewing experiences of the last year.  Not gonna lie, it was much harder to narrow it down to just 5 this time around.  Some very good figures got left off this list.

This is the Superman figure I’ve wanted pretty much since I started collecting action figures.  I love Christopher Reeve’s Superman, and I’ve been waiting for a solid action figure of him.  The larger figures were fine, but not really what I wanted, and Mattel’s smaller figure held me over, but had a whole host of flaws that prevented it from being all it could be.  NECA’s figure was not only a licensing miracle and the best version of Reeve’s Superman, but also one of the best Superman figures I’ve ever owned.

I Am Elemental were on this list last year, and were hands down one of my favorite reviewing experiences of Year 2.  Their sophomore effort, Courage, took everything cool about their initial figures and made it cooler.  This figure has all the quality of a high-end import figure, but at a much lower price, and it’s just an awesome figure to boot. 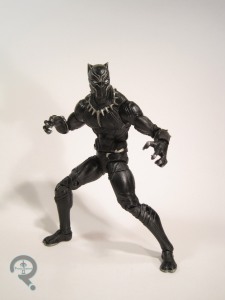 Civil War was one of this year’s highlights, and Black Panther darn near stole the whole show.  For the Legends tie-in set for the line, Hasbro turned out a Panther figure that is quite possibly their greatest figure they’ve produced since taking over the Marvel license.

This figure sort of came out of left field, being from a different venue than my usual action figure interests.  Bandai’s S.H. Figuarts stuff had impressed me in the past, but Freddie was definitely an outside the box choice, and they put a lot of effort into making this figure just as cool as possible.

Here’s a figure that just barely squeaked her way onto this list, coming at the very tail-end of Year 3.  Holy crap is this a well-done figure.  The likeness, the detail, the playability.  It’s all there and it’s all awesome.  A great showing by NECA for Aliens’ 30th Anniversary.

This is a figure I’ve wanted for 20 years, ever since I saw his prototype on the cardbacks of the old Iron Man figures.  It was very exciting to find one of these, even if he came into existence through somewhat dubious circumstances.

There are few toys I’ve gotten in the last year that brought me more joy than Poe’s X-Wing from Hasbro’s Force Awakens line.  It was by no means a perfect product, but it set me back to my childhood days of playing with my POTF2 X-Wing.  I loved it so much, I even bought the Walmart-exclusive repaint later down the line. (Honestly, this mention could really go to the whole small-scale Force Awakens/Rogue One product set.  Something about them just made me feel like a kid again when collecting them).

Well, thanks again to all my faithful reader who have stuck with me through all of my crazy action figure rantings, and welcome to any new readers I’ve picked up along the way.  Here’s to another great year!

That’s pretty much it…