CLASH OF THE TITANS (MATTEL)

Let’s take another glance into the vault of “movie toys from the 70s and 80s that only exist because of Star Wars”!  Today, we’re going with a line I’ve looked at once before, Mattel’s Clash of the Titans figures, based on the 1981 film of the same name.  Both the movie and its toys were highly ambitious, but neither hit as big as their creators had intended.  The toyline is still pretty fun, though, and gave us some pretty cool Greek mythology figures.  Earlier this year, I took a look at the line’s take on Perseus, and this review takes a look at Thallo, one of his compatriots from the film. 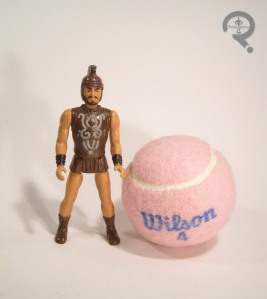 Thallo is another figure from the first, and only, series of Clash of the Titans figures.  The figure is a little under 4 inches tall and he has 5 points of articulation.  As with Perseus, Thallo has a sculpt clearly designed to mimmic the Kenner’s Star Wars line, but is ultimately far less sturdy than any of his counterparts from the galaxy far, far away.  He and Perseus share the same arms and legs, which actually works out in Thallo’s favor, because those pieces actually seem to work better on him than they did on Perseus.  The legs in particular meld a little better with the torso on this guy.  I mean, he still looks a little like he’s wearing a squared-off diaper, but it’s not as bad.  Thallo’s unique parts aren’t bad.  The head’s not quite as good as Perseus, but it’s still decent enough, and the helmet is cool.  The torso exhibits some pretty fun details, especially on the front of the armor.  Thallo’s paintwork is kinda meh.  There’s not a whole lot to get excited about there, since it’s pretty much exclusively browns.  Also, his hair is way to dark for Thallo and his eyes are reduced to simple dots, which looks rather on the frightening side, if I’m honest.  It’s not the worst thing Mattel’s ever put out, but it could certainly better, even for the time.  Thallo originally included a sword and shield, which were identical to Perseus’s.  Mine was purchased used, so no accessories for him!

I picked up Thallo during the same flea market trip where I picked up Savage Dragon.  In fact, I got him from the same vendor who sold me my Perseus figure earlier this year.  I still haven’t gotten around to seeing Clash yet (I swear I will one of these days!), so I can’t say I know much about the character.  That being said, he’s still a neat little figure, and he goes pretty well with Perseus.