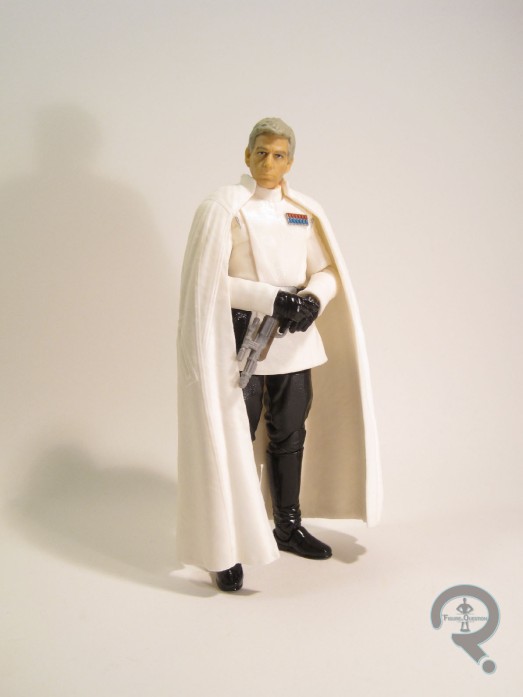 Star Wars is a franchise just as much defined by its villains as its heroes (if not more so).  Darth Vader is pretty much THE iconic movie villain, and every subsequent movie’s villain has had to do their best to live up to the shadow cast by Vader.  Rogue One of course made use of Vader himself, but only as an incidental antagonist.  The primary antagonist was Director Orson Krennic, who is pretty much a departure from Vader in every possible way.  He’s small in stature, largely unimposing, speaks in a notably unrefined manner, is a fan of empty threats, and is even dressed primarily in white.  He was a refreshing change of pace for the franchise’s villains, and Ben Mendelsohn gave a fantastic performance in the role.  Krennic has proven to be one of the more difficult characters to track down in figure form, though he’s available in both primary scales.  I was fortunate to get ahold of the larger figure, which I’ll be looking at today.

Director Krennic is part of the second series of Rogue One-based Star Wars: The Black Series figures, which is technically Series 8 of the “red box” Black Series that was launched with The Force Awakens.  Krennic is figure 27 in the line, making him numerically the first figure in the series.  The figure stands about 6 inches tall and has 27 points of articulation.  Krennic is sporting an all-new sculpt, but I’ll be genuinely surprised if we don’t see most of this body again for Tarkin at the very least.  It’s a very good translation of the Imperial officer’s uniform seen in all of the OT films.  All of the smaller details are properly placed and there’s even a nice bit of texturing on the tunic and pants, showing the fiber of the fabric.  The neck is rather on the scrawny side (which, admittedly, is another point in favor of this being re-used for Tarkin), but that’s actually covered pretty well by the cape.  The cape is sculpted, which is different for the line, since all the prior capes/robes have been cloth.  I’m certainly not complaining; it’s obviously a bit restricting, but for a character like 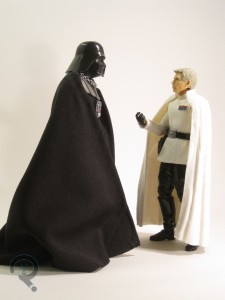 Krennic, who’s not incredibly mobile, and the end result is immensely better looking than a cloth piece would be.  The head sculpt is okay, but not anything outstanding.  From certain angles, you can see Mendelsohn in there, but by and large he’s rather off.  Still, it’s not an awful sculpt, and far from the worst likeness the line has given us.  Krennic’s paintwork continues the general upward trend we’ve been seeing on Hasbro’s collector oriented lines.  While he’s not as impressive as, say, K-2 or the Scarif Trooper, the work here is still very clean, and matches well with what’s seen on screen.  Of note, the hair is greyer here than it was on the Force Awakens Han from earlier this year, though it’s still a little closer to a light blonde than what’s seen in the movie.  Clearly, someone in licensing is against grey hair.  In addition to the removable cape, Krennic includes his custom blaster pistol, which can be stored in his holster.

While Super Awesome Girlfriend was looking for the Leia figure I reviewed yesterday, she came across this guy and decided that I needed him.  She does that a lot, but she also tends to be right about that a lot too, so yeah.  After seeing the movie, I’m definitely happy to have him, and this figure looks really cool when flanked by all of the specialized Trooper’s from the movie.