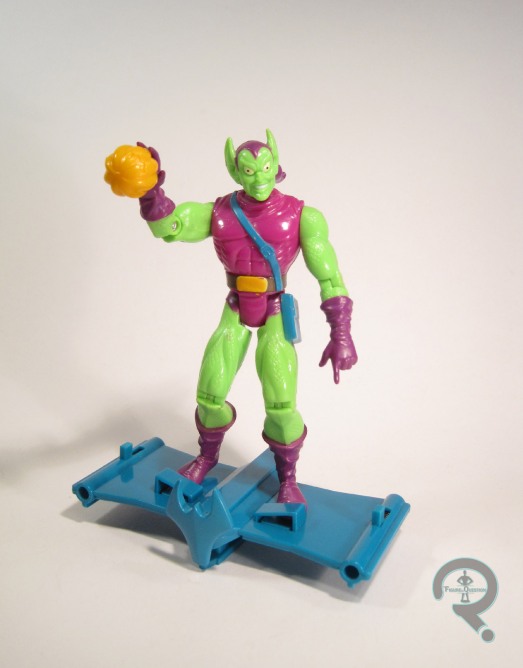 Hello and welcome to another Friday at the Figure in Question!  It’s time for another Flashback Friday Figure Addendum!  Today, I’m taking a look at another Green Goblin figure, specifically the one from the ‘90s Spider-Man line.  This is from back *before* he was Willem Dafoe.

Alright guys, after a brief stop over into the strange bizzaro world of The Stapler in Question, we are back at home with the action figures. Yay! So, back in the 90s, the 5-inch scale Marvel figures, produced by the very much at the height of their game ToyBiz were totally my jam. The figures were (at least loosely) based on the then current cartoons. Amongst those cartoons was Spider-Man: The Animated Series, which ended up with a fairly nice toyline of its own, at least for a few series. So, let’s have a look at one of Spidey’s greatest foes, the Green Goblin, as he was presented in said line.

Green Goblin was released as part of Series 3 of ToyBiz’s Spider-Man line. The cartoon did this odd thing where Hobgoblin preceded Green Goblin, which resulted in Hobs taking the Goblin slot in Series 1. And Goblins never go for even numbered series. That’s just not how they roll. The figure is about 5 inches tall, with 9 points of articulation. He’s pretty much standard for a ToyBiz figure of the time. He’s based on the character’s animated appearance, which itself was a fairly faithful recreation of the comics design. Mostly, it just comes down to style cues, resulting in a slightly “friendlier” looking Goblin. Surprisingly, Green Goblin got his own sculpt, which shared no pieces with Series 1’s Hobgoblin. I think that may be the only time these two have both appeared in a line with no re-use at all. Impressive. The sculpt itself ends up being quite impressive, with not only some pretty good proportions, but also some killer texturing, especially on the scaly arms and legs. They aren’t super-detailed like some of the sculpts that followed, but they are a great example of using just enough detail to suggest the rest (which, incidentally, is how Goblin was drawn for most of his classic appearances). Also, it’s an odd thing to point out, but this figure has some of the best hand sculpts of any figure from this time. Most were molded in a generic clasping positon, but Goblin has one splayed as if it’s just thrown a pumpkin bomb and one in a pointing position. I don’t know what he’s pointing at, but at least it’s different. Goblin’s paintwork isn’t quite up to the same level as the sculpt, but it’s pretty much on par with just about everything else being offered at the time. The colors match up pretty well to the show’s design. The colors don’t so much match up to themselves, however. The purple ends up changing a few times over the course of the figure, which is rather distracting. There is also some rather noticeable bleed over around the edges of the gloves and boots, and the edges on the shorts aren’t even close to being even. Green Goblin included his faithful goblin glider (which even launched missiles) and a pumpkin, but pesky child-Ethan lost them!

As into the ToyBiz Marvel stuff as I was as a kid, I actually ended up avoiding a lot of the Spider-Man line. The cartoon never really gripped me like the others, so I just never really had the connection. So, Goblin here wasn’t part of my “initial collection.” He was a later acquisition, fished out of a bin of low priced figures at a nearby comic book store sometime around the mid-00s. I don’t know exactly why I picked him up, but I imagine I was just filling in some gaps in the collection at low prices. Going back to review this guy, he surprised me. With most of the 5-inch figures, the nostalgia filter is firmly in place, but not for this one, and yet he still impressed me. That really says something.

Ah yes, this was the first review following 2015’s “Stapler In Question” gag, which was my second April Fools Day post.  I had originally pegged this figure as the subject of that year’s gag post, but I couldn’t come up with any good gimmicks, so he was pushed back a day, and the Stapler replaced him.

My review for this guy was pretty on point.  I had thoroughly shaken the off slump that plagued a chunk of my 2014 reviews, and was back to having some more fun with the writing again.  It probably helps that he immediately followed my SiQ review, which really reignited my writing spirit.  It should be noted that this was my second-to-last review to be published using one of my old catalogue shots.  He still had a Wilson photo I’d shot later, but I apparently deemed the original lead photo as “good enough.”  Not something I’d do nowadays, or even a month after for that matter.

Missing from my original review were his Goblin Glider and pumpkin bomb.  They cropped up during The Find.  Still don’t have the glider’s missiles, and technically there should be a second bomb, but I’m calling this close enough.   The glider is a little on the flat side, but not a bad piece for the time, and it’s honestly not noticeably worse than any of the other pack-in gliders we’ve gotten (barring the Famous Covers one, because that thing is goddamned perfection).  The pumpkin bomb could actually plug into the base of GG’s right hand, allowing for some pretty sweet posing options.  Nice forethought on that guys!

I was pleasantly surprised by this guy when I reviewed him the first time, and I’m still surprised by how much I like him now.  And, as an added bonus, he’s even more complete!