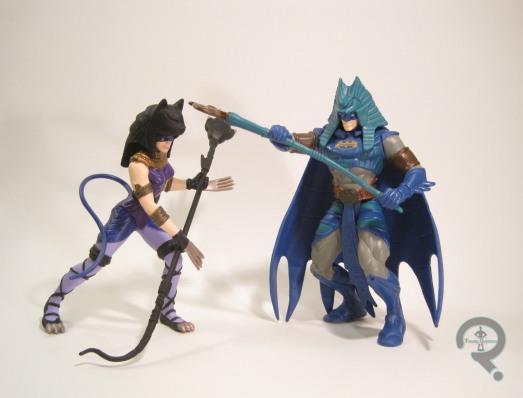 Egyptian Catwoman and Batman were released in 1996 as one of a pair of two-packs in the Legends of Batman line (the other two-pack was the previously reviewed Pirate Two-Face & Pirate Batman).  Like most of the goofy variants from this line, these two were original creations of Kenner, and had no ties to the comics beyond being Batman and Catwoman. 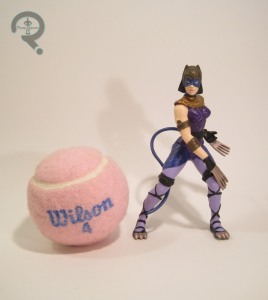 “Ancient Egypt revered the cat—with the exception of Egyptian Catwoman.  The mightiest woman pharaoh ever to rule, Egyptian Catwoman tainted the royal throne through her misuse of her immense power.  Forcing whole nations into slavery to build her lavish palace, pyramids, and towering monoliths, Egyptian Catwoman was despised and feared throughout the land.  Only her sworn enemy, Egyptian Batman, could stand up to her evil-doings and massive cat-claw battle staff to release her unfortunate subjects from her iron rule.”

Unlike Two-Face, it would seem Egyptian Catwoman is a markedly different character from her main universe character.  With that said, despite what her bio may insist, she doesn’t seem to be all that different from the average Pharaoh, apart from her willingness to fight her own battles.  Guess the cat-claw battle staff helps.  Also, can we address how silly it is that the bio has to call her “Egyptian Catwoman” every time she’s mentioned?  It just sounds kind of silly, especially since those living in ancient Egypt would be very unlikely to throw “Egyptian” in front of their name.  It’d be like me referring to myself as “American Ethan H Wilson” all the time.  Wouldn’t “Pharaoh Catwoman” have been a better choice?  Oh well.  The figure stands about 4 1/2 inches tall and has 6 points of articulation (counting the tail, which turns at its base).  Most of the articulation isn’t of much use, since she’s rather preposed; it’s really only there to let you fine tune things so that she doesn’t fall over so much (whether it actually helps with that issue is debatable).  The sculpt is okay, I guess.  It’s not as good as Pirate Two-Face, but also not as bad as Pirate Batman.  It’s somewhere in between.  The pre-posing is at least a pretty decent pose, which is clearly designed to interact with the Egyptian Batman figure.  In terms of design, she seems to take a good deal of influence from her then current Jim Balent-designed outfit, mostly in terms of color and general layout of the various elements.  There are, of course, the Egyptian-styled elements, which are all pretty decently rendered, if perhaps a bit on the soft side.  The Wolverine claws seem a bit overkill, but there are worse things.  The paint work on Catwoman is acceptable, but far from perfect.  There’s a lot of fuzz around the edges, and the gold paint doesn’t seem to have held up particularly well.  Catwoman includes a headdress (meant to evoke her exposed hair in the comics), as well as the previously mentioned cat-claw battle staff. 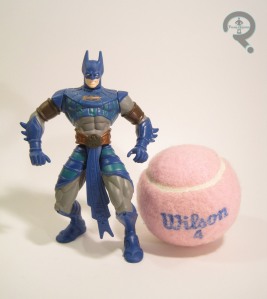 “Many years ago, the son of a high-ranking Egyptian official disguised himself as Egyptian Batman and made it his life’s mission to out an end to evil-doers.  He didn’t have to look far for his main target: his own father’s sponsor, Egyptian Catwoman.  Battling the evil, feline pharaoh with only his powerful bat-shield staff and keen intellect as weapons, Egyptian Batman strived to make his homeland a prosperous, peaceful place once again.”

Okay, so here’s my question here: why a bat?  Like, it makes sense for Bruce Wayne, but random Egyptian dude?  Cats work into the whole Egyptian mythology thing, but bats?  I don’t know.  Anyway, the figure stands about 5 inches tall and he has 5 points of articulation.  The articulation works a little better here, since the figure’s a little less preposed, which is a definite plus.  I think Egyptian Batman may well sport my favorite sculpt of the five Legends of Batman figures I’ve looked at so far.  Sure, he’s still got slightly exaggerated proportions and kind of insane muscles, but there’s a sort of balance to it.  I definitely get a Neal Adams sort of vibe from this figure.  The general design is also one of the stronger ones.  It maintains the basics of the classic Batman design, but also perseveres the whole Egyptian aesthetic, in a way that I feel works better than his pack-mate.  I particularly dig the morphing of his traditional bat-ears into more of a jackal sort of design.  It preserves the basic silhouette, but offers something new and different for the figure.  The paint work is pretty straightforward.  It’s mostly pretty clean, and the colors suit the character.  There’s still an issue with the gold paint one this figure, but it seems less present on this guy.  Like Catwoman, Batman includes a headdress, as well as his previously mentioned shield staff, which he has a little trouble holding properly.

Like the prior two-pack, I don’t actually remember seeing this set in stores when it was released.  This one I do recall seeing a few times elsewhere over the years, but I just never got around to getting one.  Super Awesome Girlfriend picked this set up for me at the same time as the Pirate set.  I was actually more interested in the pirate set at first (since they go with my other figures), but after opening them both up, this set was actually my favorite of the two, largely due to the pretty awesome Egyptian Batman figure.  If you’re looking for a good jumping on point for this line, you could do a lot worse than this set.