GUARDIANS OF THE GALAXY (HASBRO) 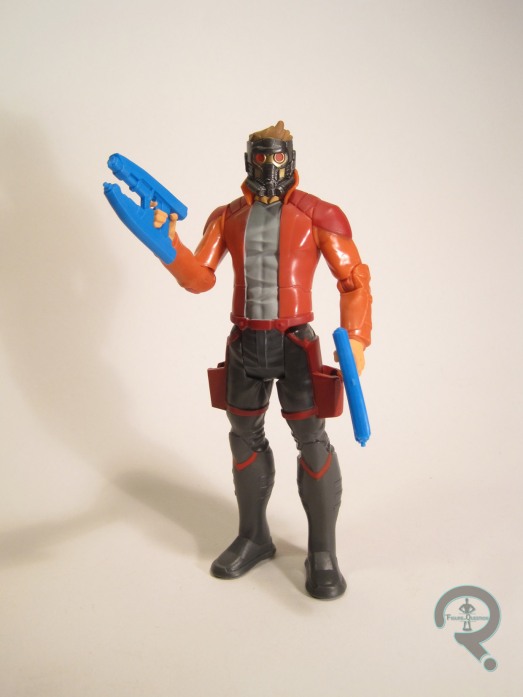 “When the fate of the universe hangs in the balance, Peter Quill is ready to defeat interstellar evil!”

With the recent release of Spider-Man: Homecoming just last week, and a whole other slew of summer blockbusters in the last month or so, it’s easy to forget that this year’s summer blockbuster season was kicked off by Guardians of the Galaxy Vol. 2.  That’s a shame, because I really, really loved Guardians 2.  Like a whole lot.  I have yet to find the second assortment of Marvel Legends from the film (I’ve seen remnants at stores, but I’m hoping for a full set), but I’m sort of bridging the gap with some of the non-Legends stuff that’s hit in the mean time.  Much like Spider-Man: Homecoming, there was a slightly smaller, slightly less high-end line of figures based on the Guardians and a few of their supporting players.  Today, I’ll be looking at Star-Lord! 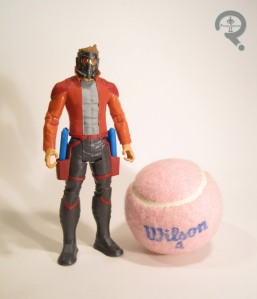 Star-Lord is from the first series of the smaller Guardians of the Galaxy line of figures, which hit sometime last year, I believe.  The figure stands just a little over 5 inches tall and he has 9 points of articulation.  It’s a bit of a shame that he hasn’t got any knee movement, but I do really like the mobility of the arms.  Now, you’ll recall that in my review of the Homecoming Spider-Man figure, I mentioned that his scale was a little hard to place; that’s less an issue with this guy.  He’s right about in line with the mid-to-late ‘90s figures from Toy Biz in terms of scaling, which is quite cool, since Peter was never privy to a figure from TB.  Obviously, he’ll fit in better with some figures than others, but he’s a nice fit.  In terms of design, he’s based on Peter’s appearance in the Guardians animated series from the last few years.  The show is itself borrowing a lot of its designs from the movies, but the characters are a little more angular and simplistic.  This is another point in favor of compatibility with the older figures, since it means he’s not quite as hyper detailed as more recent figures have become.  Even as an animated sculpt, there’s actually a lot of really sharp detail work, especially on the helmet.  For the price point of this line, I was pleasantly surprised by how clear the details were.  The paintwork is pretty straightforward color work; what’s there is mostly pretty clean, and it’s all pretty bright.  He does look a little washed out to my eyes, but that’s really just a symptom of the design he’s based on.  Peter is packed with his two element guns.  They’re pretty well sculpted, but completely un-painted.  Also, they aren’t compatible with his sculpted holsters in the slightest bit, which is rather perplexing.

I really kept meaning to pick this guy up to give the line a try.  I saw him so many times in the store and came so close to buying him, but just never did.  What finally got me to crack was finding him on clearance at Barnes & Noble and also having a gift card, meaning he cost me nothing.  Honestly, at full price, I still would have been very happy with this figure.  Obviously, he’s not on par with a Marvel Legend or anything, but as I noted, he’s a great fit with the old TB stuff, and just a pretty fun figure in general.  This is the style of figure that got me into collecting, and I’m happy to see it back!