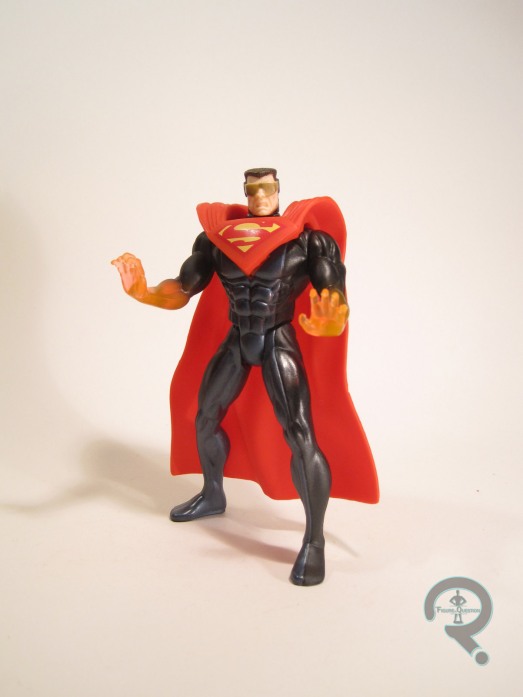 After producing one of the most expansive DC toylines ever in the ‘80s with Super Powers, Kenner ran into some issues keeping up with the whole “expansive” aspect as they moved into the ‘90s.  If it wasn’t Batman, it really wasn’t selling.  They tried out a Superman line, Man of Steel, in the mid-90s, which was at best moderately successful.  After two series at retail (the second of which was virtually nonexistent) the line’s third series was scrapped.  Fortunately, two of the proposed figures were salvaged and offered later down the line as exclusives.  I’ll be looking at one of those two, prospective Superman-replacement Eradicator, today. 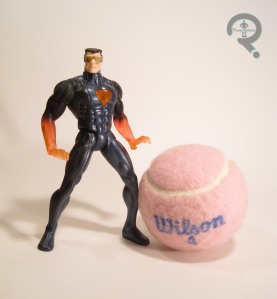 Eradicator was offered by ToyFare magazine as a mail-away offer, extending Kenner’s Man of Steel line by one figure.  He’s based on Eradicator’s design from the “Reign of the Supermen” arc, which was, at the time of this figure’s release, the character’s only design.  The figure stands about 5 inches tall and he has 5 points of articulation.   His sculpt was unique to him, and is a pretty decent recreation of Eradicator’s page bound counterpart.  He’s a little more pre-posed than the earlier Man of Steel figures, showcasing Kenner’s steady move into the Total Justice style of pre-posed figures.  Eradicator is at least not ridiculously pre-posed; the slight upturn of the arms at the elbows makes sense for his energy-based powers, and the slight step in his legs helps to keep him balanced with the slightly heavy cape piece.  The head sculpt has a rather intense expression, which was fairly in character for Eradicator, and offered a nice change from the standard Superman sculpts.  The hands on the figure do seem a little on the large side, but perhaps it’t just the pose throwing things off.  His cape is a removable piece, which plugs into place.  It’s a little on the bulky side, but not terribly so.  Underneath is a fully detailed sculpt, which actually has a pretty nifty light-piped feature where the usual logo would be.  Eradicator’s paintwork is pretty decent; the application is mostly clean and sharp.  The contrast could maybe bee a little higher on the blue sections of the costume, but the metallic sheen is still pretty cool.  Also pretty cool?  The translucent feature on his arms.  That’s a lot of fun.

Eradicator predates me really getting a lot of the ToyFare exclusives, so I didn’t get him new.  I’ve been on the look out for one recently, and I ended up fishing this guy out of 2nd Chance Toyz’s $1 bin.  He was still in his little baggie and everything!  This guy’s okay overall.  Not the most exciting figure of all time, but he’s a solid rendition of the character.