“A vision in an Egyptian temple leads Marc Spector to don a silver shroud and become the crime-fighting hero, Moon Knight.”

Let me tell you, I really like me some Moon Knight.  Well, I really like me some Moon Knight when he’s handled by a competent writer.  Or at least one that doesn’t equate a split personality to being able to write him as literally possessing the personalities of Spider-Man, Wolverine, and Captain America all at once (gee, thanks Bendis).  Current scribe Jeff Lemire is producing one of my favorite runs with the character, and my enjoyment of him is at an all-time high.  Perfect time to release some action figures.  Fortunately for me, Hasbro totally agrees, and has offered Moon Knight in both scales of Marvel Legends.  I already looked at the smaller figure three months ago, and today I’ll finally be following that up with a look at the main event, the new 6-inch scale Moon Knight!  Let’s see how this guy turned out!

Moon Knight—sorry, “Marvel’s Moon Knight”—is part of Hasbro’s latest Spider-Man-centered series of Marvel Legends, released to coincide with the release of Spider-Man: Homecoming.  No, Moon Knight wasn’t in Homecoming (believe me, I would have made that fact known to everyone I came into contact with), but he’s loosely Spider-Man related, I guess.  I mean, there was that time that Spider-Man was one of his split-personalities (again: thanks, Bendis).  That’s sorta related; demented and sad, but related.  This isn’t Moon Knight’s first time as a 6-inch Legends figure, but it is his first since Series 15 of Toy Biz’s run (a whole 11 years ago). This figure stands just under 6 1/2 inches tall and he has 32 points of articulation.  Like the smaller Legends Moon Knight from earlier this year, this Moon Knight is sporting his most recent costume.  I know some fans were hoping for a classic all white Moon Knight, and while that certainly would have been cool, I still really dig this design. When this figure’s prototype was first shown off, there was a lot of discussion about which of the base bodies he was built on.  In hand, he’s an almost entirely new figure.  And oh boy, does that make for a really sharp looking figure, since it’s allowed for most of the body to be specifically tailored to Marc.  Though the body’s new to Moon Knight, it looks to have been built with re-use in mind.  All of the armored pieces are add-ons, but rather than the usual floating pieces and rubber overlays that we tend to see on lines that rely more heavily on bucks, Moon Knight’s add-ons are all hard plastic pieces affixed to the body with pegs and glue.  The end result looks very clean, and I can definitely see this making for more unique looking figures down the line.  The basic build of the body looks to be somewhere between the 2099 and  Spider-UK bodies, kind of taking up the slot that has typically been held by the faithful Bucky Cap body. The only re-used piece is his head, which hails from the Hulkbuster Series’ Blizzard figure.  It’s just a basic masked head, so it’s pretty sensible, and it’s even been given the all-new hood piece, so even placing the two figures side by side, they won’t look identical.  Speaking of that 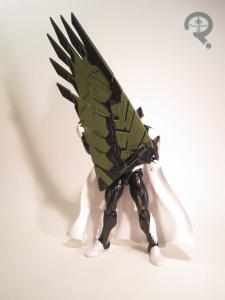 hood, another selling point of this guy is his separate hood and cape, allowing for better posing options.  His all-new cape works well with the head, and is definitely one of the better cape sculpts we’ve gotten from Hasbro.  Great dynamic flow, but not so crazy as to limit his posing options or get too heavy.  Moon Knight’s paint work looks fairly simple on the outside, but it’s actually really well-rendered when you really look at it.  All of the armored bits are done in a pearlescent white, as opposed to the flat white of the cape and hood.  Also, thanks to the separate pieces used for the armor, most of the pieces are molded in the proper colors, keeping things once and clean.  As an added bonus, the few sections that do require paint apps remember the essential rule of dark over light.  I cannot adequately express how happy that makes me.  Remember how disappointed that the smaller Moon Knight included no extras?  This guy makes up for that in spades.  He’s packed with two sets of hands (fists and gripping), one large moonerang, three smaller moonerangs, and Daredevil’s billy club standing in for his usual staff.  Perhaps my favorite part of all these extras is that the fists have slots between the fingers, allowing for the smaller moonerangs to be placed in-between on one hand or the other.  It makes for a pretty awesome look.  Moon Knight also includes the front of Vulture’s right wing, for those that care about such things.  Oh wait, that’s me!  Nice!

Remember how illusive the Warlock Series Cyclops was?  He’s got nothing on Moon Knight.  I’ve been looking for this guy since May.  After three months of searching retail with no luck, I finally gave up and started looking online.  I was fortunate enough to be looking just as Amazon put up a small allotment of him for retail.  Sold.  I’m so happy to finally have this figure, and he’s gonna be giving that 90s Cyclops figure a run for that “favorite Legends to date” spot.  It’s clear that someone at Hasbro’s a very big Moon Knight fan, and its translated into one of the best comic-based Legends that Hasbro’s ever produced. 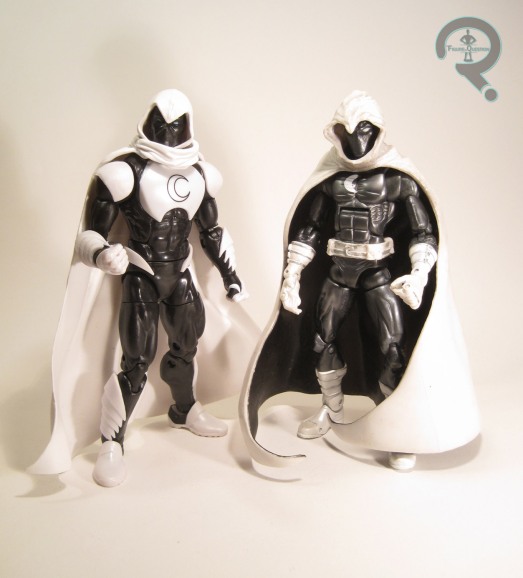