Sometimes you don’t need an elaborate costume.  You just need enough collar.  Or something like that.  I feel like that’s probably what Boston Brand’s tailor said to him when he presented Boston with his Deadman costume.  Because, I mean, really, just look at that collar.  That’s a lot of collar, right?  You could say he’s a real….red collar worker… No?  Yeah, you’re right, that one sucked.  It’s okay, that was Tim’s fault, anyway.  Where was I?  Right, action figure review.  Here’s an action figure review. 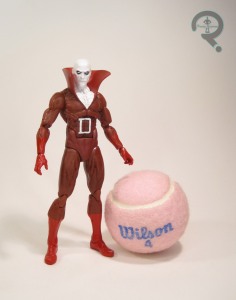 Deadman is part of the first series of DC Icons figures.  He’s figure 02 in the line-up, just after Batman.  He’s also the fourth and final figure from this series to be reviewed on the site.  Yay?  Deadman’s based on his appearance from “Brightest Day,” which seems like a reasonable enough choice, seeing as it’s one of the few times his been at the center of a major story.  It also allows for what is essentially a classic Deadman, albeit with an ever so slight modern update (he loses the belt, and trades in the pixie boots for taller fare, but that’s really it).  Ironically, this does mean we’ve gotten a Deadman figure based on when he wasn’t actually dead, but hey, why not?  The figure stands about 6 inches tall and he has 27 points of articulation.  For some reason, he doesn’t get cuts at the tops of his boots, which does restrict his poses a little bit, but it’s still pretty manageable.  His sculpt follows the same basic formula as the rest of the line.  It’s unique to him, but definitely has common ancestry with the likes of Batman and such.  I like that it doesn’t get to overly skinny, like some other Deadmen do, since Boston’s not supposed to be *that* small.  Despite his 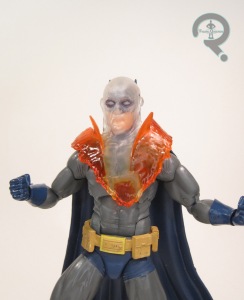 somewhat basic design, there’s a fair bit of detail work, especially on his upper torso and face.  Given the gaunt nature of his face, I’m led to believe this might be Deadman from the very end of “Brightest Day,” after he’s died again.  I appreciate that his “D” symbol is raised, rather than painted, but it’s a little odd that the same wasn’t done for his boots or gloves.  It’s not a big deal or anything, just a little strange.  The paint on this guy is pretty solid all around.  The two toned red on the costume looks pretty great; The shades could perhaps stand to be a little more divergent, but they look good enough to me.  The face is really just a flat white, but that accents the sculpt very well, and I really dig the gradation from black to grey to white around the eyes.  It adds an extra level of otherworldliness to his look.  Deadman is packed with two sets of hands in fists and open gesture poses, as well as a pretty cool possession piece, which can be slipped over the head and shoulders of other Icons figures to make it look like Deadman is possessing them.  I do find a little strange that no unmasked Boston Brand head was included, given how much of “Brightest Day” he spent unmasked.

I was tempted by Deadman when these figures first showed up.  I never got the DCUC figure, due to not liking how it turned out, so the only version of Boston in my collection for a good long while was the old DCD version.  I very likely would have bought him had Cosmic Comix not sold out of everyone but Mr. Miracle when these first hit.  Since I never saw him in person, I just never got around to buying one.  In the last few weeks, I’ve been slowly going back and piecing together a complete set of Icons.  Deadman was may first purchase in that venture.  I found him at a store called Alternate Worlds, and they had a coupon on Yelp, so I used it to get him.  He’s a pretty fun figure, and easily the best version of the character out there.